The modernisation of the monarchy and Covid-19 regulations are likely to have an effect on the mourning period and burial of AmaZulu King Goodwill Zwelithini kaBhekuzulu.

The monarch, who ruled the nation for over 50 years, died on Friday morning at the Chief Albert Luthuli Central Hospital.

He had been hospitalised for about a month.

Cultural expert Gugu Mazibuko told News24 that, because of modernisation, some cultural issues might be obsolete.

“For example, when Queen Nandi died, King Shaka ordered that, during the mourning period, the nation should not till the land. That will likely not happen this time. The royal house is also expected to follow Covid-19 protocols.”

Mazibuko said issues around the burial and mourning for a king were sensitive.

“Things have changed. Before there were hospitals, the death of a king would be kept secret until the royal family was ready to announce. The prime minister would then inform the indunas on what to do next.”

The last time the Zulu Kingdom buried their monarch was in 1968 when Zwelithini’s father, King Cyprian Bhekuzulu ka Solomon, died.

Social events were suspended during the mourning period.

For King Zwelithini’s death, the KwaZulu-Natal government has declared an official week of mourning.

KZN Premier Sihle Zikalala said all government and private functions would be suspended and a day of prayer would be held on 18 March.

“This moment of immense sadness, we call on all people to remain calm and mourn the passing of the monarch in a dignified manner. This is the time to unite as a nation and give His Majesty the King a fitting farewell for his legacy,” Zikalala said.

President Cyril Ramaphosa announced that the king would be given a state funeral – at a date still to be determined –  and flags would fly at half-mast from Saturday (13 March) until the evening of his burial.

Mazibuko said the AmaZulu prime minister, Prince Mangosuthu Buthelezi, would, after consultation with the royal council, announce the funeral date and what is expected of the nation during the mourning period.

“The prime minister is the mouthpiece of the royal family. I believe, because of Covid-19 regulations, he will make announcements in line with the regulations. People will follow and respect royal protocol because they will be saying their final goodbyes to their leader.”

Buthelezi has already said it would be “unconscionable” to allow people to travel to Nongoma to pay their respects.

“These are extraordinary times, which will not be forgotten in the collective memory of our nation. In this historic moment, we are bound by the need to protect the lives of the late king’s relatives and all his people.”

Mazibuko said because of the sacred nature of the burial, it is usually not open to the public.

“The burial of a king is not open to everyone. It is something that is very sacred and it takes place behind the curtain because of the rituals that have to be performed in bidding the king farewell.”

She said, after the funeral, Buthelezi would make announcements on who will be the heir to the throne.

She said choosing an heir was not a simple matter.

“It is not like the British monarchy, where the first child is chosen as an heir.

“While still alive, the king would discuss who he wants as an heir with the prime minister and the royal council. They decide who will be the successor.”

Zwelithini was the first son of King Cyprian and his second wife, Queen Thomo.

She said the king would be remembered for not only modernising the monarchy, but also reviving lost cultural practices.

“He revitalised cultural ceremonies that were forgotten, like the reed dance. He also revived circumcision, that was stopped during the reign of King Shaka. He worked hard with the health department to revive circumcision in a modern way.”

Zwelithini worked with the health department to encourage Zulu men to undergo the process in an effort to curb the spread of HIV/AIDS.

“A big tree has fallen and the nation will do all it can to pay their last respects with a lot of discipline,” Mazibuko said.

3 bag the jackpot in the Daily Lotto 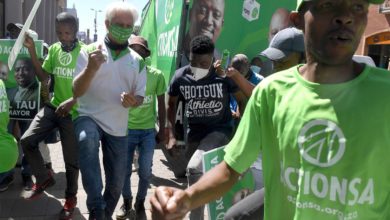 Mannya calls for Unisa council to be dissolved