Mthuli Ncube, Zimbabwe’s finance minister, poses for a photograph following an interview in Harare, Zimbabwe, on Thursday, Aug. 15, 2019. On the eve of major protests, which were called by the main opposition party over plunging living standards, Ncube said the country would establish a Monetary Policy Committee within a month that will cut interest rates, begin selling bonds with maturities of as long as 30 years, and proceed with a plan to privatize everything from state telecommunications companies to timber plantations.
, Bloomberg

(Bloomberg) — Zimbabwe plans to sell its maiden U.S. dollar domestic bond, listing it on the recently launched stock exchange in the resort town of Victoria Falls in a bid to kickstart debt sales in the country, according to two people familiar with the situation.

The $100 million auction will be co-arranged by the Cairo-based African Export-Import Bank and will take place this year, the people said, asking not to be identified as an announcement hasn’t been made. The Infrastructure Development Bank of Zimbabwe will help arrange the listing and Afreximbank will provide credit insurance, the people said.

Mthuli Ncube, Zimbabwe’s finance minister, told Bloomberg in an Aug. 25 interview of potential plans for the local sale of a U.S. dollar bond to help pay compensation of $3.5 billion to White farmers evicted from their land two decades ago. He didn’t disclose the size of the planned debt sale. Ncube said on a later webinar that the bond would help build a yield curve.

Listings on the Victoria Falls exchange are denominated in foreign exchange as opposed to the more established stock market in Harare that uses Zimbabwe dollars.

Humphrey Nwugo, the chief operating officer for Afreximbank in the southern African region, declined to comment on Monday, citing client confidentiality. The IDBZ declined a request for comment until the matter is finalized.

Where South Africa is heading for the rest of the year, according to economists 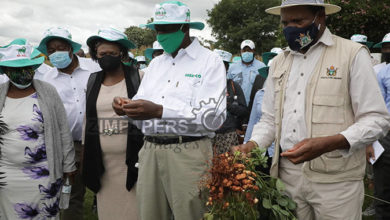