FORMER Warriors captain Willard Katsande was left bloodied after being assaulted in an ugly road rage incident over the weekend.

The 35 year-old defensive midfielder was travelling home after making his debut for new club Sekhukhune United against Chippa United on Saturday when he was violently attacked in Roodepoort.

According to Katsande’s statement to the police, which was published by the South African newspaper City Press, the altercation was allegedly sparked by a man in a white Ford EcoSport who showed him the “middle figure” while driving on Hendrick Potgieter and Peter roads.

“White male came out of his vehicle and hit me with his fists on my head. He also break (sic) my right window and right side mirror on my vehicle. He hit my vehicle with his foot on the side. The total value of the damage is R50 000,” reads the police statement.

Police spokesperson Lieutenant Kay Makhubele had not responded to media enquiries at the time of publishing.

Katsande confirmed the incident: “With due respect kindly note that I can’t comment any further on this matter.”

Despite the incident Katsande still featured for Sekhukhune in their 2-0 win at Maritzburg United as an early second-half substitute.

Katsande joined Sekhukhune during the current transfer window after spending a decade at Kaizer Chiefs. 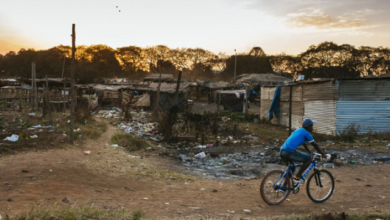 Why South Africa’s land expropriation won’t be like Zimbabwe