IT’S just a month before the Tokyo 2020 Olympic Games gets underway, but Zimbabwe’s chances of even a fairytale medal, look very remote.

Three of the five athletes, likely to make up Team Zimbabwe — sprinter Ngoni Makusha and swimmers Donata Katai and Peter Wetzlar — had their names submitted to take up universality slots.

The National Athletics Association of Zimbabwe were offered a slot to the Games by the World Athletics.

The Zimbabwe Aquatic Union got two slots, one female and one male, from FINA.

Makusha is expected to compete in 100m.

With a personal best of 10,17s in the event, he will be there to make up the numbers, rather than fight for a medal.

South Africa’s Gift Leotlela qualified to the Olympics, with a time of 9,94sec, and his fellow countryman Akani Simbine clocked 9,99sec.

For swimming, if they get the final confirmation, Wetzlar is set to compete in 100m freestyle and his personal best time is 50,50sec.

Zimbabwe Swimming chair, Tracey Doorman, says based on their swimmers’ personal best, the expectation will be for them to improve their times.

“For any athlete, a personal best is their first expectation and to do their best, following all their preparation,” said Doorman.

“We have to wait until July 1 when we will be advised by FINA on whether we have been given the place.

The athletes, obviously, are continuing their preparations.”

Sports administrator, Robert Mutsauki, pointed out the need for the country to push, not just for qualification, but to try and win something, at the Olympic Games.

“The primary objective should be to send competitive athletes (and not just qualifiers) to represent the country at the Games,’’ he said.

“And, clearly, athletes who are struggling to qualify cannot be described as competitive.

“We need to be selecting Team Zimbabwe from a pool of world-class athletes.

“This will ensure, not just easy qualification, but also competitiveness during the Games with our athletes, once again, getting to semi-finals, finals and also winning medals.”

The Zimbabwe Olympic Committee chief executive, Stephen Mudawarima, admitted it has been an uphill task to qualify.

Swimming icon, Kirsty Coventry is the only Zimbabwean to win individual medals at the Olympics.

The other medal, a gold, was won by the women’s field hockey team in 1980.

All the red list countries for travel as Tunisia, Haiti and Dominican Republic added in latest review 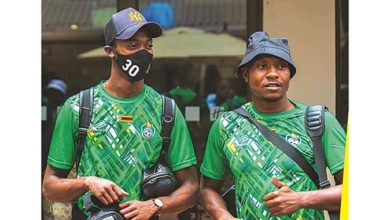 Zimbabwe youngster in Leicester City squad to face Man U