Racheal Nachula can barely wait to become a two-sport Olympian at the Tokyo 2020 Games in 2021.

At Beijing 2008, Nachula reached the semi-finals of the 400m in one of the best showings by a Zambian female runner at the Games.

Now the 34-year-old is looking forward to returning to the Olympics as a core member of country’s national football team, one of the 12 featuring in the Women’s Olympic Tournament.

She told Olympic Channel, “I think immediately when I step in Tokyo everybody will be like, ‘Ah now we have Nachula here, from the 2008 Olympics she comes in 2021, not as a 400m runner but a striker,’ which is good for me.”

After over a decade as a sprinter, Nachula opted to return to her “first love” football after a dip in form on the track.

Nachula signed for Spanish second division club Zaragoza in June, and feels she could hit peak form for the Games starting on 21 July.

The healing power of football

As a young girl, Nachula’s greatest wish was to play football.

But her parents would hear none of it, especially her mother who believed sports would distract her daughter from school.

She respectfully stayed away from the pitch, and says “life became very hard” as a 13-year-old when her father died.

Lack of money forced Nachula – the 10th of 12 children – to stop attending school, and she turned to football for comfort.

Speaking to Olympic Channel from Santiago where Nachula scored as Zambia’s ‘Copper Queens’ beat Chile 2-1 in a friendly match, she said, “When my mum passed on in December 2003… it wasn’t easy. I decided I must do something. I then joined sport out of need to earn an income.”

In her teenage football days, the strong and pacey forward attracted the attention of a local track and field athletics coach, who encouraged her to train as a sprinter.

“Athletics coach Hanson Mushili had come to watch football at the complex where I played, and he saw how I was moving speedily and running around. After the game he approached me and told me that he could help me, train, and live a better life as a runner,” she recalled.

“After a few months I went to a local competition, my first, and I won. After that I stayed in athletics.” – Racheal Nachula to Olympic Channel.

The switch to track

So began Nachula’s national dominance as a 200m and 400m runner, reminiscent of Mozambique’s Maria Mutola switching from football to the 800m.

But the turning point of her career was her performance at the 2005 Southern Africa Regional Championships in neighbouring Harare.

Running with bare feet, she won her individual events (200m and 400m) and anchored the Zambian 4x400m team to gold.

“The Southern region competition was what cemented my life as a sprinter.”

But her best was yet to come.

“I moved to South Africa (at the High-Performance Centre in Pretoria) after earning an IOC scholarship and continued training and competing until I qualified for the Olympics,” she shared.

“That was a great day! Each athlete wants to qualify for the Olympics. I ran 51.25 and achieved the A standard, and I had also attained the B standard of 52.21.”

At the Beijing Olympics her women’s 400m semi-final qualification, the first by a Zambian, left a lasting experience.

“I was happy to be part of the Olympics and to run with top athletes like Sanya Richards, Allyson Felix. It was amazing!” – Racheal Nachula on Beijing 2008 Olympics.

But a dip in form forced her to change the playing field once again.

“I tried to recover my form but struggled. I reasoned it’s not too late, I can still do something else. I went back to football in 2014 and my first international game for Copper Queens was in 2017.”

“When one door closes another opens, don’t keep looking at the closed door. We can also manage to develop another talent. But I am still trying to figure out which is my God-given talent.” – Racheal Nachula on switching from track to football.

The 34-year-old was, after all, not new to the sport. The new Copper Queen was malleable and soaked up pressure and delivered when called upon.

She earned the golden boot at the 2019 Council of Southern Africa Football Associations (COSAFA) tournament where Zambia lost in the final.

“I switched quite late, but it was easy to go back as I had played football before. I have one advantage. I used my speed from track on the football pitch. When they give me the ball, I run quickly and get the ball,” she explained.

Just like her sprint days, Olympic qualification is again the highlight.

Led by their China-based captain Barbra Banda, Zambia defeated Angola, Zimbabwe, Botswana, and Kenya to reach the final round of the qualifiers.

The Copper Queens then upstaged 2012 Olympians Cameroon in the last stage to qualify for Tokyo.

“In our team, most of our players had never played high-level football, unlike the Cameroonians who had been to the Olympics, World Cup. But we believed in ourselves, never stopped believing,” Nachula said.

“In Lusaka that night, it was party after party.” – Racheal Nachula on Olympic qualification.

“I remember the return leg in Lusaka the stadium was full. People wanted to witness history. We led 2-0 at half time and they pulled a late goal, aggregate 4-4, but we qualified on the away goal rule.”

Her brilliant 2019 meant she would be among the first Zambian female players plying their trade at an overseas club.

“I never had it in mind that I would play professional football now, it was just God’s favour. I have so far played four games and have three goals,” she said of her move to Zaragoza in the twilight of her career.

“I think the performance at COSAFA in 2019 opened all doors for me. I have followed the steps of our captain Barbra Banda. She showed what she can do for Copper Queens and we are following in her footsteps.”

Nachula has been happily sharing her Olympic experience with her teammates, who are eager to make their debut at the Games.

“Some of them have asked me how it feels to be at the Olympics, to participate. I told them that being at the Olympics… it’s very motivating. All the top athletes in the world dream of the Olympics. For us as Copper Queens to go there for the first time, it’s a huge plus for us.

“I think I am one of (few) Africans who has been there as a track and field athlete and this time around I am going there with a different sport.”

She is relishing her return to the Olympics and a lot more.

“We will not go to the Olympics as underdogs, we are going there as champions!”

“For us to qualify for the Olympics it means we are good, so we are going to go there and show our best and play our best football. We have been to the Africa Cup so the Olympics will be like our World Cup. We will meet big teams. But those big teams like the USA, Netherlands, will also fear us.

At the 2012 Africa Cup of Nations finals, the unfancied Zambia men’s national team achieved one of the most incredible victories in continental football beating four-time finalists Cote d’Ivoire on penalties, which also gives Nachula hope.

She added: “Football is a game of chance and tables can turn around. Our Copper Bullets went to the Africa Cup they were called underdogs. From being underdogs, they ended the tournament as champions.”

It is the never say die approach and self-belief that the Southern Africans hope will lift them high in Tokyo.

No African women’s team has clinched a medal at the Olympics, ever since the inaugural edition in Atlanta 1996.

“Every game will be a serious game for us. We will play each game as if it’s our last game. We will play like it’s a final. We will give it our all.”

With the number of foreign-based African female players increasing, Nachula is hopeful that she can be among the generation that will help change the outlook of a sport that is still struggling at home.

“In Africa we have the talent, good players, but what we lack is structure and support. We only come to Europe to improve our game. We need to have more matches like our men in Africa like the CAF club champions tournaments,” she noted.

“Equal pay for the teams too can help from clubs and national teams. Women are doing a lot more with less. Can you imagine how much more we can do with the same conditions as the men?”- Racheal Nachula on improving terms for African female football players.

Her dreams and her future are, however, not limited by the current discouraging conditions weighing down the women’s sport in most countries.

“To those who want to become footballers, the struggle is real in the beginning, but the gains come in the end. When I started in Lusaka, I couldn’t afford to commute. I would walk to the stadium for 45 minutes, train and walk back again for 45. So just stay committed to the cause and remain disciplined.

“I have a lot I must do. I want to do my best in my life as a footballer.”

“Others says the sky’s the limit but I don’t believe in that, because there is something above that sky.”

She is on the right path and staying true to the cause like her icons.

“I can’t run away from athletics…,” she concluded laughingly. “I look up to Sanya Richards-(Ross) and Allyson Felix those two make my days.

“They have achieved a lot in terms of World and Olympic titles. I want to be like them. Perform for as long as they have. They make feel that I can do this and much more…I still have many more years on the pitch!” 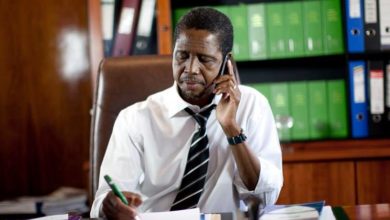 The curious case of Zambia’s Afronauts who failed to launch