Zambians vote on Thursday (Aug 12), in what is expected to be a close contest between the ruling Patriotic Front (PF) and the opposition, United Party for National Development (UPND).

UPND secretary-general, Batuke Imenda, said they have 4.7 million people who would vote for them.

“The UPND has a verifiable and authentic database of 4.7 million dedicated voters who will overwhelm our opponents and carry us to victory to form the government. Further, there’s evidence that a significant number of undecided voters have decided to vote for president Hakainde Hichilema and the UPND after realising the non-viability and disastrous leadership under the PF administration,” he said.

He appealed to party supporters and the people of Zambia to take ownership of the election and to not pass on the responsibility to an individual, a party or organisation.

“This is your election that will decide whether this country is swallowed into the sinkhole or soars up like a noble eagle into the sky. Every registered voter must turn out to vote.”

There are 16 candidates running for the presidency, but the race is expected to be closely contested by Edgar Lungu, leader of the Patriotic Front, and Hichilema of the United Party for National Development.

Lungu, 64, was elected as the candidate of the ruling Patriotic Front for the January 2015 presidential by-election, which was to determine who would serve out the remainder of Michael Sata’s term following his death.

In the election, he narrowly defeated opposition candidate Hakainde Hichilema and took office in January 2015.

He was elected to a full presidential term in the August 2016 election, again narrowly defeating Hichilema.

Hichilema, 55, better known as HH, is a businessman and politician who led the United Party for National Development since 2006.

He contested in five presidential elections and lost them all.

The Electoral Commission of Zambia, in June, banned the Patriotic Front and United Party for National Development from campaigning in Lusaka, Mpulungu, Namwala and Nakonde following political violence.

Lungu deployed soldiers to help the police fight escalating political violence during the election campaign on August 1. This was after two Patriotic Front supporters were killed in Kanyama.

The two were hacked to deat, allegedly by United Party for National Development supporters.

According to Zambia media, seven people have been arrested in connection with the Kanyama murder.

The police told Zambia media that it was alleged, Patriotic Front party members were preparing meals and having lunch at their camp when a group of suspected United Party for National Development members attacked them with machetes and other sharp instruments.

“To curb the political violence we have witnessed in the past two days, I have allowed the Zambia Army, Zambia Air Force and Zambia National Service to help the Zambia Police in dealing with the security situation.

“Maintaining law and order is a daily chore of the police, but sometimes, they need help from other security wings,” Lungu wrote on his Facebook account.

Soldiers have been y deployed in some parts of Lusaka and would be deployed in other parts of the country if the situation demands so, he said.

“The events in Kanyama where two of our members were allegedly killed in political violence makes me very sad. I’m sad not because the victims were members of my party, but because they were Zambians who did not deserve to die in that manner,” Lungu said.

“The commission strongly condemns this barbaric act as it does not only violate the electoral code of conduct but loss of life also brings burdens on the affected families and the people of Zambia at large,” acting chief electoral officer, Royd Katongo, said.

“As members of the public may recall, the commission has in the past month issued warnings to political players to conduct themselves in line with the provisions of the Electoral Code of Conduct. The commission has gone further to suspend political parties and candidates who have perpetrated violence and breached the electoral code of conduct.”

Hichilema has complained that the police have blocked him from accessing Mbala and Mpulungu towns in the north.

The two leaders have launched a robust social media election campaign going into the election after large rallies were banned in an attempt to cut the spread of the novel coronavirus.

Their social media campaign included messages to voters on the countdown to election day, places they visit and photos of their supporters. | African News Agency (ANA)

A38 crash sees car hurtle into ditch in wet conditions

Words into Action in Zambia / IJF.org 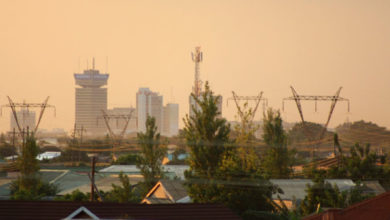