The attackers spray a gas that makes their targets dizzy, according to local media reports.

Zambia has deployed soldiers to suppress a wave of attacks on civilians by gangs using a special gas to immobilise their victims.

“The president has directed the army to be on the streets,” Vice President Inonge Wina told legislators on Friday during parliamentary question time in the capital, Lusaka.

The move to send the military into the streets came after the assaults prompted panicked rioting, the lynching of three suspected attackers on Thursday and a warning from the United States embassy.

The criminal gangs spray a gas that makes their targets dizzy before they attack, according to local media reports.

“We cannot continue to see people being terrorised,” Wina said.

Police have said they are probing “incidences of malicious administering of chemical substance on innocent citizens by criminals”.

The vice president said the attacks, which initially started in the northern Copperbelt region before spreading to Lusaka, were fuelled by fake news being peddled on social media.

“The gassing of innocent Zambians is a very un-Zambian phenomenon and is being fuelled by social media,” she said.

At least six Facebook posts referring to the alleged incidents have been shared hundreds of times and viewed thousands more in the last few days, according to the AFP news agency.

Details in the posts have varied, from claims of vigilante attacks against alleged perpetrators to the use of old images lifted from unrelated online reports.

The attacks have prompted the US embassy in Lusaka to issue a security alert.

“Rumors of ritualistic killings and residential gassings have led to incidents of civil unrest and vigilante justice in multiple provinces throughout the country,” it said in an alert issued on Thursday.

“Reports of rioting and civil disturbances are increasing in some provinces, to include Lusaka.” 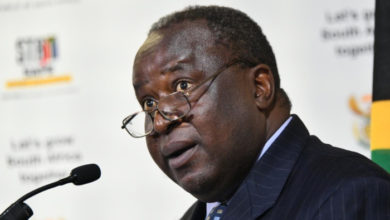 Ramaphosa reprimands Mboweni for speaking against removal of Zambia’s governor

Why Amidu turned down Zambia move