As WWE champion Bobby Lashley and challenger Drew McIntyre head toward their WrestleMania 37 showdown, the intensity has continued to ratchet up. That continued Monday night on WWE Raw, a show that saw both big men in action.

Lashley, who had already put out a bounty on McIntyre’s head, lost control of his temper to the point where he kicked Shelton Benjamin and Cedric Alexander out of The Hurt Business. Even having lost the two men who helped him rise to his first world championship, Lashley still found a way to end the night standing tall — and standing over McIntyre. All it took was a little help from an invading member of the SmackDown roster.

CBS Sports was with you all night, bringing you recaps and highlights of all the action from the ThunderDome.

Bobby Lashley def. Shelton Benjamin via submission with the Hurt Lock. Benjamin and Alexander confronted Adam Pearce, demanding Benjamin be given a match with Lashley this week and Alexander given one next week. Benjamin nearly scored the upset after hitting Paydirt, but Lashley kicked out before firing back, hitting two spinebusters and locking in the Hurt Lock for the win as Benjamin passed out in the hold.

Drew McIntyre def. Ricochet via pinfall after a Claymore. McIntyre spent much of the show waiting for anyone on the roster to attack. When the attack never came, McIntyre stormed into the locker room and demanded someone fight him. After no one took him up, he confronted Ricochet, who said he didn’t care about Lashley’s words but was always up for a fight. After a brief match, McIntyre hit a Claymore for the finish. He was then attacked from behind by Mustafa Ali.

Drew McIntyre def. Mustafa Ali via pinfall with a Claymore. McIntyre welcomed a fight with Ali, leading to the match. Ali relentlessly attacked McIntyre’s knee until McIntyre was able to hit a headbutt and a Claymore for the victory. McIntyre got on the mic and demanded Lashley come face him and finish him off. This brought Lashley to the ring, where McIntyre said nothing he does will prevent the match from happening at WrestleMania before saying Lashley’s actions prove he’s afraid. This led to a brawl between the two before McIntyre drove him from the ring with a headbutt. King Corbin from Smackdown then appeared to blindside McIntyre before hitting a Deep Six, allowing Lashley to lock in the Hurt Lock. Lashley would lock in the hold three different times before the show went off the air.

McIntyre demanding a fight was exactly what his character should do, and the choices of who got involved made sense, escalating from Ricochet, who was battling with honor, to Ali, an underhanded heel who is looking for any opportunity, before finally ending with Corbin, who was exactly the kind of man who would make the move out of self-interest. McIntyre is now in trouble heading into WrestleMania, exactly as the face should be. Grade: B

What else happened on WWE Raw? 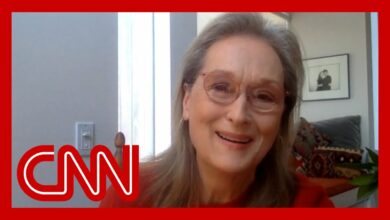 Meryl Streep asked what President she based Netflix role on. Hear her reply – CNN

John Krasinski Reacts to Amy Schumer’s Joke About His Marriage