A record number of pregnant women were admitted to intensive care with Covid last month, data shows, as doctors raised concerns about vaccine hesitancy among expectant mothers and urged them to get jabbed as soon as possible.

Figures from the Intensive Care National Audit and Research Centre (ICNARC) showed that in England, Wales and Northern Ireland 66 pregnant women ended up in intensive care in July, the highest number since the pandemic began and three times as many as April last year. A total of 46 recently pregnant women were also admitted to critical care.

The numbers of expectant mothers in intensive care has risen steadily in recent months, from 17 in March to 22 in June but a spike in admissions occurred last month amid rising Covid cases and a loosening of restrictions. The mean age of admission is 32.

Dr Edward Morris, the president of the Royal College of Obstetricians and Gynaecologists, said: “The number of pregnant women being admitted to ICU is worrying and reflects the rising prevalence of the virus in the UK that we saw in July.

“We have data of nearly 200,000 pregnant women receiving the vaccine with no safety concerns … We recommend that all pregnant women should get vaccinated against Covid-19, as the best way to protect themselves and their babies against severe illness and premature birth.”

The Royal College of Midwives said: “Pregnant women are at greater risk of serious illness if they get Covid … Getting the vaccine is the best way to keep you and your baby safe.”

Claudia Li, 30, a project engineer for Severn Trent Water, contracted Covid-19 after returning to work last month. She was left unconscious on a ventilator, with medics at Birmingham City hospital forced to urgently deliver the baby, who was not due for 16 more weeks.

Li is now urging women to get vaccinated. “Please, take the vaccine. I didn’t. Don’t risk yours and your baby’s life,” she told the Birmingham Mail, as she and her baby recover.

Scientists found that more than 99% of pregnant women admitted to hospital with Covid-19 are unvaccinated, with the Delta variant posing a greater risk of severe disease.

Researchers at Oxford University have described their findings as “concerning”, saying that one in 10 pregnant women admitted to hospital with symptoms of Covid-19 often require intensive care.

Joeli Brearley, the founder of Pregnant Then Screwed, said the problem was that pregnant women were getting mixed messaging about whether to get inoculated. “Pregnant women have received confusing information from outset. Initially, they were told they were not allowed to get the vaccine as pregnant women were not included in clinical trials, so they had to wait until scientists collected enough real-world data to show it’s safe.

“Then the guidance changed to tell pregnant women they could get the vaccine if they wanted … only recently, in the last few weeks, NHS and the chief midwife said they strongly recommend pregnant women get it,” she added.

The chief executive of University Hospitals of North Midlands trust, Tracy Bullock, told a meeting of the trust board: “One of the other things we’re seeing which is of real concern is around pregnancy.

“We know that both locally and nationally there’s a very high rate of unvaccinated pregnant women. And we are seeing more pregnant patients in critical care than in previous surges. You can probably count on one hand the number we saw in previous surges.”

Harrington to travel through Dublin on open top bus 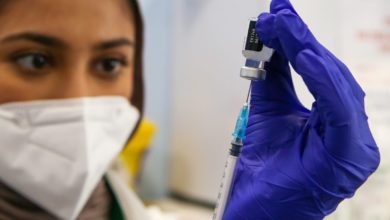 Almost Half Of U.S. Adults Are Now Partly Vaccinated — And Over 80% Of Seniors