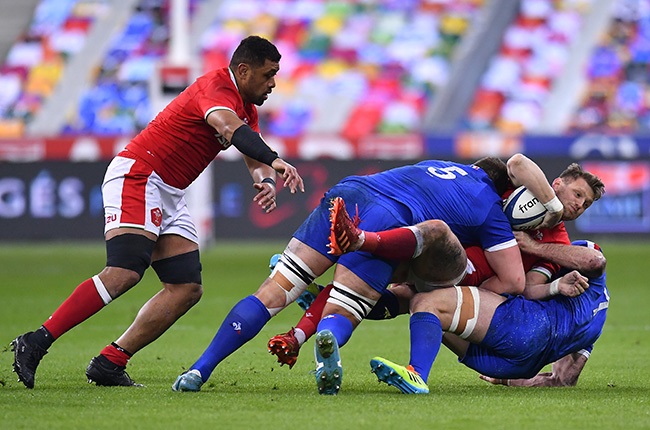 Dan Biggar of Wales is tackled by Paul Willemse and Charles Ollivon of France. (Photo by Aurelien Meunier/Getty Images)

Brice Dulin scored an “incredible” injury-time try to help 14-man France to a 32-30 home win over Wales and stop the visitors from claiming a Six Nations Grand Slam.

Lock Paul Willemse was sent off for the hosts, who can claim the championship title on Friday should they seal a bonus-point victory over Scotland with a winning points margin of at least 21.

“The team believed in their stars, their destiny and their ability to climb the mountain,” France coach Fabien Galthie told France Televisions.

“We knew what was at stake, we knew the opponents, the dynamic they were in, so we knew what to expect but the scenario is incredible.”

“I thought we were pretty good for 80 minutes but it was just those dying seconds. Our ill-discipline brought a lot of pressure on,” Jones told the BBC.

“Credit to France for those last 15 minutes. When we look back, the discipline brought the pressure on as well as superb French play.”

France came firing out of the blocks, showing their intent by choosing to kick to the corner over taking a penalty goal after five minutes as they searched for a bonus-point victory.

Wales’ first foray into the opposition half followed the restart and they were denied a score as Gareth Davies was held up in-goal by Charles Ollivon and Gael Fickou.

From the resulting scrum Wayne Pivac’s Welsh team worked through six phases and Dan Biggar went over on a smart crash ball, also converting to bring the sides level after 13 minutes.

The hosts reacted within 90 seconds as Dulin put up a clever chip over the Wales defence, Jalibert catching and passing on to halfback partner Antoine Dupont to go behind the sticks.

Jalibert added the extras before Wales responded for a second time in an entertaining opening quarter, Josh Navidi burrowing over to claim his first international five-pointer, Biggar adding the extras to draw level.

Biggar and replacement France flyhalf Romain Ntamack, on for Jalibert after a blow to his jaw, traded penalties to make it 17-17 at the interval with Wales in the ascendancy.

They maintained the momentum after the break and Biggar added a second penalty to make it 20-17 after 47 minutes.

Their quick pace at ruck was too much for the France defence and following a lovely grubber kick and favourable reading by the television match official, Josh Adams was awarded a try despite Dylan Cretin’s last-ditch defensive effort.

Biggar took his tally to 17 points for proceedings as Wales led 27-17 with half an hour left.

France responded swiftly and Ntamack made it a seven-point game with a penalty after a no-arms tackle from the influential Justin Tipuric.

Despite the points, Wales kept a stranglehold on the game as they sensed a 12th tournament clean sweep approaching, and a fourth for skipper Jones.

They were ruled against once again by TMO Wayne Barnes before Biggar slotted a penalty for a 30-20 score on the hour.

France then spurned a shot a goal for a kick to the corner, Barnes again in action to rule that hooker Julien Marchand had been held up by three Welshman over the line after a rolling maul.

As France camped in the Wales 22m, they worked an overlap and Dulin found a way over but the score was chalked off as Barnes spotted Willemse’s foul play at a ruck.

The South African-born lock was adjudged to have made contact with the eye area of Wales prop Wyn Jones and was shown a red card with 12 minutes left, a third opposition player sent off against Wales during this year’s Six Nations.

France kept on pressuring the Wales line and Welsh No 8 Taulupe Faletau and full-back Liam Williams were both shown yellow cards for cynical play.

In a dramatic finale, French skipper Ollivon scored and with Ntamack’s points from the tee it was a three-point game with as many minutes remaining.

After a series of drives led to space out wide, Dulin duly crossed in the corner with the clock 94 seconds into the red to spoil the Welsh party and keep French hopes alive. 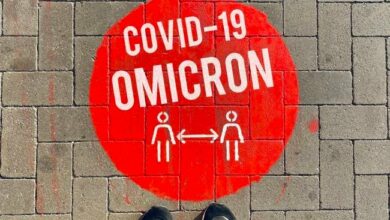 Few new restrictions – but several requests. Here is what the President is asking of South Africans 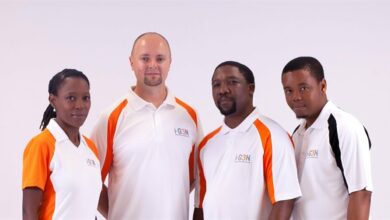 This local solar battery firm has an affordable fix for homes, startups hit by load shedding