As he assumed the post of Chairperson of the Southern African Development Community in August 2003, Tanzania’s then President, Dr Benjamin Mkapa, sang the praises of the Mutual Defence Pact.

He told his fellow Heads of State and Government that “this (the Mutual Defence Pact) will be our way to show our commitment to, and application of, the concept of African solutions to African problems”.

The Mutual Defence Pact is a key aspect of the SADC security architecture as overseen by the Organ on Politics, Defence and Security Co-operation.

He went on: “The current security architecture has a long history, starting with the then Frontline States alliance, a grouping opposed to colonialism and apartheid, working closely with the Southern African Development Co-ordination Conference (the predecessor to today’s SADC).

“This arrangement was reconfigured in 1992 in anticipation of South Africa’s liberation and inclusion in SADC, and from 1994 a new, widened security paradigm started to inform the thinking of senior decision-makers.”

This means that, essentially, from the times of the Frontline States in the 1970s, through to the SADCC in the 1980s, into the SADC of today, the region’s leadership has been progressively working towards establishing a security architecture that ensures mutual protection and the kind of stability that fosters development.

The 2003 consummation of the Mutual Defence Pact, under the aegis of the Organ on Politics, Defence and Security Co-operation, was supposed to birth the jewel in the crown of regional security being the SADC Standby Force and Brigade.

It has been nearly 18 years since Dr Mkapa’s bold and hopeful assertion that the Mutual Defence Pact was a demonstration of the region’s commitment to the “application of the concept of African solutions to African problems”.

In that time, the Southern Africa region has witnessed military flare-ups in the DRC, Lesotho and now Mozambique. There have also been major issues of concern in Madagascar (unconstitutional changes of power), South Africa (repeated xenophobic attacks), and Zimbabwe (clashes between opposition protestors and state security agents).

To the credit of the leaders in the region, they have largely been able to keep a lid on most of these flashpoints through a mixture of good diplomatic work and the tried and tested politics of solidarity. With the exception of the DRC (where the United Nations-affiliated SADC Force Intervention Brigade was deployed) and Mozambique, there has been no real need to invoke the Mutual Defence Pact and mobilise the Standby Force and Brigade.

But now that need is there. The situation in Mozambique is deteriorating. The region has mechanisms to intervene and assist but these are either being activated too slowly or not all.

Granted, what has been unfolding in Mozambique since 2017 is a new situation for the region. We have never really seen anything like it except in newspaper and TV reports about other parts of the world.

Botswana’s President Mokgweetsi Masisi, the Chairperson of the SADC Organ on Politics, Defence and Security Co-operation, has highlighted the need to make use of the existing apparatus to assist Mozambique.

“We have a Defence Pact, what was its purpose? It wasn’t designed to decorate the walls of SADC member states offices. So it has always been a question of timing; when do we apply it? We have not been applying it since 2017 and it’s only now that we have decided and we have resolved after a very detailed assessment by experts in all our countries, advised that now is the time. The cost including the opportunity cost would be far greater if we postpone it,” he told the media in Botswana recently.

“It would be reprehensible for us not to respond when we have what it takes to respond. We have both the mechanisms to respond, the resources to respond; and it is the responsibility of the Double Troika to respond. And if we don’t, if you look at the direction of the assault in Mozambique anytime, tomorrow it could be in our shores because it is growing.”

He also said: “We commit through the pact to withstand, to repel and eliminate any threat to our peace and security and in that spirit we recommended strongly to the Double Troika because it is only the Double Troika that can cause for the application of such.

“We recommended strongly … that SADC must respond to support Mozambique to attain peace and repel the rebels and the Double Troika endorsed the recommendations of the organ, so it should be expected in the not so distant future.”

So what is stopping SADC from using the Mutual Defence Pact to assist Mozambique, and by extension protect the entire region? Do we really have to wait for the United States and European Union members to bring their guns and soldiers into our yard?

Articles 6 and 9 of the pact provide the necessary instruments to start easing the situation and assisting the people of Mozambique to get back on the path to peace and stability.

Article 6 provides for collective action such as self-defence because “an armed attack against a state party shall be considered a threat to regional peace and security and such an attack shall be met with immediate action”. Further, Article 9 of the pact provides for defence co-operation, while also making provision for collaboration in training, joint military exercises, and intelligence.

This requires political will. It requires SADC to put its money where its mouth is and pony up to assist the terrorised people of a beleaguered member state.

Failing to do so, as President Masisi says, would be reprehensible. 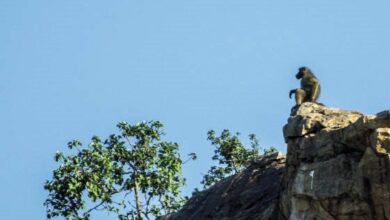 With my own eyes: Eagle klaps baboon, Tuli block

Merck Foundation and First ladies of Ghana, Namibia and Zambia recognized winners of “More than a Mother” Fashion Awards with the aim to raise awareness about infertility and breaking its stigma in their countries

Conquering nature will never be the silver bullet (commentary)