Education MEC Debbie Schafer said in a written parliamentary question that the department had forked out more than R600 000 for Neumann’s disciplinary hearing.

“This was an application brought by the individual in question, in an attempt to interdict his disciplinary proceeding for an indefinite period, which the Labour Court struck off the roll,” she said.

Schafer said the disciplinary hearing lasted 26 days – 19 of which was used by Neumann’s defence to argue their case.

The department has been locked in a legal battle with Neumann following his refusal to reopen the school at the height of the Covid-19 infection peak last year.

Neumann, and other high and primary school principals, wrote an open letter to President Cyril Ramaphosa to request that schools be closed.

He refused to allow staff and pupils back at the school, and it prompted the department to proceed with disciplinary action. Members of the Heathfield High School Action Committee and neighbouring schools protest outside Western Cape Education Department on April 21, 2021 in Cape Town, South Africa. It is reported that the group demanded the department to drop all charges against Principal Wesley Neumann.

In a statement, in response to Schafer’s parliamentary question, the Heathfield High School Governing Body (SGB) said the department had gone overboard.

“It is an absolute waste of taxpayers’ money that they spent this colossal amount on trying to get rid of one person. Mr Neumann was only protecting the children and had their best interests at heart. The decision was taken by the SGB, and he merely implemented it.”

The SGB added the case had taken a tremendous strain on Neumann and his family.

This exorbitant expenditure confirms our belief that this case against Mr Neumann is personally and politically motivated by the MEC and the previous head of education – this amounts to wasteful expenditure at the taxpayer’s expense to settle personal vendettas.

The department’s spokesperson, Bronagh Hammond, said the nature of the seriousness of the charges being contemplated included, among others, an assault of a pupil, failure to obey a legitimate instruction, and bringing the organisation into disrepute.

ALSO READ | Covid-19: Night vigil in support of principal who refused to open his school during peak

“The legal bills include costs for both a Labour Court application and the formal disciplinary hearing. The department is entitled, as is Mr Neumann, to have legal counsel. The Labour Court matter was brought about by Mr Neumann – not the department. We cannot be criticised for getting legal counsel for such an application as it is common practice to get counsel in such a matter.”

Neumann declined to comment on the charges against him.

However, in a school letter addressed to parents on the allegations, he said: “In response to the above charge [assaulting a pupil], it must be noted that the learner was intoxicated and physically attacked my person when he was asked to follow reasonable instructions.

“The physical assault against me was recorded on CCTV and was in full view of learners, parents, visitors to the school and educators. In good faith, I forwarded the video footage to the education department, where the footage clearly shows that the learner attacked me, and also provided all affidavits of witnesses to this incident.”

ANC MPL Khalid Sayed said the department was determined to get rid of Neumann “by all means possible”.

“The WCED even hired a senior counsel on a matter of this nature. The same WCED will cry inadequate funds when it is asked to account for unplaced learners next year, yet funds that could have been used to build more classrooms and employ more teachers are used to target excellent, hardworking and dedicated black principals.”

Searching for a slice of paradise? Mauritius is looking to lure international homebuyers

One sold for R420,000 in May. Now another bottle of Napoleon’s wine is going on auction in SA. 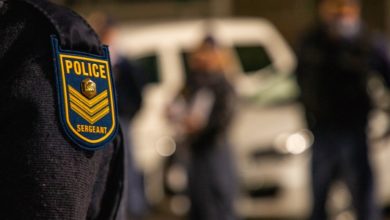 Cop turns down R10k bribe after man, woman arrested with drugs worth R1.5m