ON March 17, United Kingdom-based apostle/evangelist/teacher, and prophet, Uebert Angel made history when President Mnangagwa appointed him Presidential envoy and Ambassador-at-Large to Europe and the Americas. His main brief is to seek trade and investment opportunities for the country that has been reeling under illegal sanctions for the past two decades.

The appointment was a first for the Church, and demonstrates that the Second Republic is prepared to work with various stakeholders in order to achieve Vision 2030’s goals and objectives.

It was unfortunate that some media outlets interpreted this appointment as a position the 43-year-old Ambassador got after reportedly currying favours with the ruling elite, following his Church’s philanthropic work.

As the first Zimbabwean to probably interview Ambassador Angel in April 2010, I present below excerpts from the interview I had with him and his wife Beverly at a local hotel.

The interview was a follow-up to the three-day Greater Life Conference his Spirit Embassy Church co-hosted with Tabernacle of Grace Ministries, led by Apostle Batsirai Java.

The conference was held at the Zanu PF headquarters hall in Harare, and was attended by prominent pentecostal church leaders in and outside Harare.

Ambassador Angel was 32 years old then, and his UK-based church was only three years old. On the first evening of the conference, Prophet Uebert Angel, remarked that some people might be asking themselves, “How can a small boy do this? My answer is I save a big God.”

During the conference, the Angels handed out 10kg bags of mealie-meal; bars of soap and bottles of cooking oil to needy people. These were bought from offerings given the previous day. The Angels said they were currently looking after 100 orphans in Zimbabwe.

That was eleven years ago when there was no Covid-19, and when there was a multi-currency system in the land, that had significantly reduced the inflation rate.

Prophet Uebert called on other pastors: “If we believe that people should give, shouldn’t we be doing some giving too? Tele-evangelists shouldn’t be saying, ‘send your money’. They should say, if you’re needy, send your phone number, and I will send you something… How come the preacher wants your £20 and not a hundredfold that he promises when you send him money?”

The key scripture that anchors his ministry is 1 Corinthians 4:20 — “The Kingdom of God is not in word only, but in the demonstration of power.”

Back in April 2010, when The Arena with Hildegarde caught up with Prophet Uebert, his favourite saying was: “Jesus said it, I believe and act upon His Word and that settles it, that is my story . . . It’s all Jesus and less of me”.

Who was this flamboyant 29-year-old prophet with exceptional communication skills, exploding on the Zimbabwe scene? Another foreigner coming to make claims about what the Lord was saying about Zimbabwe and its people?

In this exclusive interview, Prophet Uebert said he was born in Masvingo Province in 1978.

“I prophesy because I was born to prophesy. I knew that I’d be a prophet at the age of five when I fell critically ill. This was confirmed when I was in Grade 2 when a voice called out to me from a bush and told me that it was Jesus Christ who had saved me from death,” he said.

Prophet Uebert said he got born again (“a little”) into the Family of God Church (FOG), led by Prophet Andrew Wutawunashe, when he was doing his Form 2 at St Antony’s High School in Zaka.

In 1995, when he was in Form 4, his brother took him to a FOG conference at City Sports Centre, and this is when he was really led to salvation.

Said Prophet Uebert, “Now that we see people who doubt, we doubt a lot. As I grew up, I had never seen people with or without spiritual power. At the Show Grounds, a demon manifested, and my brother cast it out. I laughed it off and said, ‘My own brother, casting out demons!’

“After that, I did not want to be part of any pentecostal church because I said, ‘they have too much of God. I didn’t want to get close to God. I just wanted to be human, and not this’.

“In other words, I wasn’t sceptical, but I was thinking — between being intelligent and being stupid, there are no demons. I had reached the level which I could doubt. My father had never told me about demons. He believed that there should be a God somewhere. He didn’t believe in a personal relationship”.

Even after these reservations, he stayed on in the Church.

After St Antony’s, he did a CPA (Computer Professionals Association) course with a Harare college, and worked for some private companies, before relocating to the United Kingdom in 2001.

He said when they went to the United Kingdom, he was not running away from anything or anyone. His brother was already there.

“It was more of an adventure and that feeling of saying I am going to the UK. Our motive was to improve our educational and professional qualifications”, he said.

By 2010, he was married to Pastor Beverly whom he met in Marimba Park, Harare and they had three sons.

Pastor Beverly weighed in: “He is the one who led me to salvation. I was in the Roman Catholic Church. He ministered to me, showing me things in the Bible that I thought were not there — pure Word, not other people’s opinions.

“When they were in Ipswich, he said he had a powerful vision, and towards the end of that spiritual translating experience, a voice from the Lord said, ‘I am sending you’, and he was given 1 Corinthians 4:20 — ‘For the Kingdom of God is not a matter of talk, but of power’.

“That is why it is a central verse in our church . . . I remember after a year, we joined another Church as benchers. Then one day, a Mexican-American pastor Mike Aldaco, said he had received a vision. This was an old man and we were not even close.

“He (Aldaco) told me that God wanted me to start my own Church. We knew this, but we had learnt to submit, because if you submit, you wait until the leader releases you . . . When your leader understands, it’s a blessing. So, when he told me, we left to start a multi-national church. There are more than 10 nationalities. So, it’s not a Zimbabwean, Kenyan or British church. It is the church of Jesus Christ. But when we started, it was just my wife and I.”

The couple said that for two years, they were out of God’s plan as they refused to take offerings, including tithes because they wanted to prove that they were not after people’s money. They wanted people to come for the Word. Since giving offerings is a Biblical principle, they said God reprimanded them.

Prophet Uebert, said their church was called Spirit Embassy because “God has said he wanted it to be the embassy of the Holy Spirit, where the Holy Spirit will work. So, the Holy Spirit, and not I does every miracle I perform. God gave it the name . . . The Holy Spirit is a friend. He is ever present, and I acknowledge His presence every time.”

On the third night, the booking time for the conference venue had to be extended to accommodate people who had to be attended to: “Miracles only come to confirm God’s Word. That’s why the Bible says, the Apostles went about doing good, but God confirming His Word by the miracles they performed. So, the Apostles had to preach first, and the miracles followed to validate the Word,” he explained.

Was he always called Angel considering that he is a Shona-speaking Zimbabwean?

He explained how the name-change occurred: “I got to Angel because God told me . . . It might not go down well with people, but we follow God. We have the family name Tsindikidzo. You know what it means? An uncle of ours married his own father’s second wife. They had a son whom they called Tsindika, meaning, don’t talk about it; keep this a secret.

“But what happens is that every time you ‘meet’ God, He ‘changes’ your name: Abram to Abraham; Sarai to Sarah; Jacob to Israel; Saul to Paul, etc. Every time God sees that the name is not congruent to His plan, He changes it. In the Bible, when God does something, He gives it a name. Why, because a good name is hard to find.

“Another (family) name is Gonzo (rat). Who wants to be a rat? The third one is Mudzaniri. Our grandfather used to dance a lot when he got drunk. And, that’s the name you would have to carry with you?”

Speaking about the benefits he got from the name change, Prophet Uebert said, “I will tell you how many things changed because of that name — Angel — the spiritual things that people do not want to think about. Angel means, beautiful messenger, and Uebert is a German name that means intelligent.

“My eldest son is Uebert; the second born is Levi Hanoch. Levi is the priestly tribe and Hanoch (Enoch), the man who walked with God all his life. The last born is Jude Eloi. Jude means from the tribe of Judah, and Eloi means God my Father. So, it is praise God who is my Father.”

The Arena also asked Prophet Uebert Angel: “Fakes or counterfeits come. They know the Word. They can also perform miracles. How do people distinguish between that which is true and that which is false?”

Prophet Uebert said, “You can only distinguish between the two if you are a man of the Word, because you can never find the genuine by studying the fake. The genuine only comes in one form, while counterfeits come in many forms. But the best thing you can do is to study the right one so that whatever else comes after, you know the correct one.

“The problem we have as Zimbabweans or Christians is that we like to study the fake so that if another fake one comes, we know. Yet, it does not follow. Study the genuine, and when the fake comes, and does not match, then question.”

He also said that people are now confused because they are used to going to false prophets who tell them that they were bewitched by relatives.

“This does not promote the main rule Jesus left — love. So, if your prophecy will cause me to hate, it is not for the glory of God.

“The problem is that people do not understand the role of the prophet in the New Testament setting. The Bible says, ‘Let no man teach you except the Holy Spirit’. So many people feel there is no need for prophets because the Holy Spirit is here, but too many people don’t hear the Spirit. It’s all about faith. Faith is the victory that overcometh the world.”

Describing the nature of his prophecies, he said, “. . . Prophecy does not mean for someone to get something. It only lifts your faith up, and you, by your own faith, you get something.”

Speaking about opposition to him and the future he said, “I don’t have anything against those who oppose me. I am not surprised, because what I do is extraordinary. As for the future, you have to wear sunglasses because it is too bright.”

The original article was first published in The Herald on 22 April, 2010 under the column “The Arena with Hildegarde”, with the headline ‘The Holy Spirit is a friend’.

Zimbabwean journalist on trial for…

Pakistan on verge of successive innings triumph over Zimbabwe 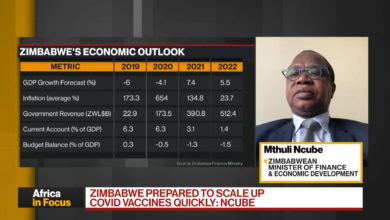 Promoting trade between Zimbabwe and the DRC