Cape Town has a plethora of hidden gems and nestled among the greenery surrounding Table Mountain is the Washerwoman Trail.

“We are here in a very magic spot surrounded with much history,” Cape Town tour guide Matt Weisse told News24. In the third episode of Secret South Africa, we venture along the Washerwoman Trail, a pathway along a stream that runs off Table Mountain and down to Deer Park in Cape Town. A sand filter basin, which removed any bacteria from the water before it was used.

In the third instalment of the Secret South Africa series, we venture along the Washerwoman Trail, a camouflaged route weaving along a stream that runs off Table Mountain.

The trail is named after a group of women who washed the laundry of the city’s servicemen in the 1800s. They would clean the clothes at a bricked washhouse that is still visible along the trail. The Washerwoman Trail stream running down the slopes of Table Mountain.

The ruin of an old mansion

“Sometimes up to 400 ladies used to gather in town early in the morning before walking in their wooden sandals up a cobble pathway – bringing the washing up to these washhouses, to do the dirty laundry for the sailors, the soldiers.”

These houses were built in 1888 and still have the original drying line, wash basins and the shelves where dry laundry was stored. The inside of a washhouse, where the washerwomen would clean the clothes of sailors and soldiers.

Further up the trail there is more to discover. There are “haunted ruins”, a spot where a magic ring was supposedly lost and the tomb of a prince.

Premier Mathabatha, wife get vaccinated as Limpopo gets Phase 2 rollout under way 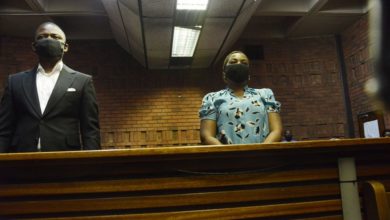 Dobson: Not even overturned rough calls would’ve been enough for WP against rampant Bulls