Molefi Ntseki was at first in a turn of events on Friday named by Bafana Bafana head coach Hugo Broos as part of his new-look technical team, a claim that has since been denied by SAFA.

The Belgian named his predecessor Ntseki – who SAFA recently sacked – as his assistant during an interview on the Sport On with Thabiso Mosia show on SAfm.

SAFA released a statement that contradicted their own head coach by dismissing earlier reports while insisting a local assistant coach was yet to be finalised.

“Contrary to widespread news, SAFA would like to clarify to all football fans that the association has NOT appointed any local assistant coach for Bafana Bafana,” a statement said.

“The name making headlines is NOT the Association’s position. The SAFA NEC will appoint a local Assistant Coach soon.”

Broos had confirmed Ntseki as his second assistant while praising his knowledge of the local game in South Africa.

“I have met with him twice already, and the man knows all the players here, and he’s happy to be assistant again.

“That’s good to me because I asked him if he’s sure, and he said ‘yes’.

“I asked SAFA about a second assistant coach, and they asked me what do you think about him (Molefi Ntseki), and I said if he’s fine with being second again, then I have no problems, and I met with him, and he’s a good football person.

Broos, at his unveiling, previously also revealed just how important a role his local assistant would play under him.

“Why I absolutely wanted a South African coach is he will be of great help to me in the first weeks and months,” Broos added.

“He knows the culture. He will help me a lot. Even if I have the experience of Africa with Cameroon‚, this is a different country‚ with different things and culture,” he continued.

“I will also impart my experience to him. Because there the Chan [African Nations Championship]‚ or Cosafa [Cup] – he will coach that.

“When you’re talking about an assistant coach‚, and it’s the same for the Belgian‚ the emphasis is on coach‚, not assistant.”

Bafana Bafana will next face Zimbabwe in an away Group G clash in their opening 2022 World Cup Qualifier at the beginning of September. 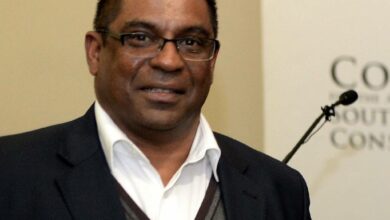