Israeli cannabis manufacturer Univo (TLV: UNVO) has begun importing cannabis grown by leading international company Canopy Growth in Lesotho, Africa. This week Univo imported a relatively small amount of cannabis to Israel and based on the results of testing for its quality plans to import 500 kilograms. Univo’s deal is with a local Lesotho subsidiary of Canopy Growth.

The Lesotho cannabis complies with Israeli Ministry of Health standards for medical cannabis but judging by their names – Jack Herrer, Super Lemon Haze,,White Rhino, and The Doctor Flower Bomb Kush – some are prevalent on international recreation markets. These strains have high THC content, the ingredient in cannabis that gets users high. This category is in relative short supply in Israel. In the future, Univo may bring these products to Israel for processing in order to export them on to the European market.

The company also announced that it has received approval to import 208 kilograms of Minerva inflorescences from Canada. This is a unique type of cannabis that is cultivated indoors and fetches a higher price than cannabis grown in greenhouses. Univo will process these inflorescences in its factory, and market them in Israel. The company is paying about NIS 2 million for the Canadian cannabis. Only one other company – Cannasure – has approval to sell this product in Israel.

Univo is the first medical cannabis company to embark on commercial operations in the Israeli market as part of the new arrangements. The company has a processing factory in Israel and is already selling medical cannabis products under its own brand to pharmacies. It also has its own farm in Israel where it cultivates cannabis but has yet to commence commercial operations with produce it has grown itself.

Univo also recently reported an agreement with the Kineret pharmacy to establish operations for distribution to end customers. Kineret is a member of a management group with approximately 40 other pharmacies spread out across the center, north and south of Israel. The joint venture will have a first right of refusal (and if not exercised, this right shall be granted to Univo) to approach these pharmacies in order to engage in distribution agreements and to establish additional points of sale with similar volumes of sale. Univo presently has sales agreements for up to 20 tons of medical cannabis. 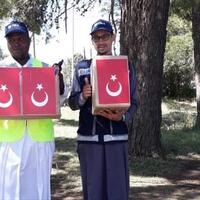