University of Cape Town students have vowed to disrupt classes as the university gears up to welcome back thousands of students on Monday.

Disgruntled students descended on the campus early on Friday to air their grievances regarding financial exclusion.

They marched from Observatory to the Kramer Building on campus, blocking Main Road outside the Baxter Theatre and disrupting traffic.

The co-chairperson of the university’s residence council, Mila Zibi, vowed the demonstrations would continue on Monday.

“The university is not showing a willingness to communicate with us at all. Our demands remain the same, tomorrow is the UCT council meeting and they will take direction. We are here to ensure that all students are back at the university and to make sure that our demands are met,” Zibi claimed.

He added the police had kept a watchful eye over protesters but maintained their distance.

UCT spokesperson Elijah Moholola said the university was aware of the issues that have been raised by student representatives.

“Most of the issues are receiving attention at national level through the Department of Higher Education and Training. These include issues relating to the National Student Financial Aid Scheme [NSFAS]. At an institutional level, the UCT executive has engaged with the SRC over the issues raised. The executive remains committed to this engagement process.”

Moholola added the university had put measures in place to assist eligible students with historic debt.

“In February 2021, UCT put out an open call for any student with historic debt to apply through the annual financial aid appeals process. UCT has set aside around R30 million for this purpose.

“The university has about 1 655 students with historic debt, amounting to about R88 million. UCT, like all other universities, is awaiting NSFAS funding decisions for 2021 applicants. NSFAS handles all funding applications and these are outside the control of the universities,” he said.

“We can understand their anger and rage at what’s going on right now, what’s going on in terms of the funding NSFAS, what’s going on with regards to an innocent by-stander- it affects us. It affects us because it’s the poor among us in the country. And as a university we are engaging on how we can address some of the institutions issues specifically.”

The demonstration at UCT follows similar protest action in Johannesburg where Wits University students also took to the streets over financial struggles.

On Wednesday, they blocked off Empire Road in Johannesburg, demanding they be allowed to register for the 2021 academic year, regardless of the historical debt they owe.

Cabinet announced on Thursday it had approved additional NSFAS funding for students.

Glencore chair to step down at latest by next year's AGM 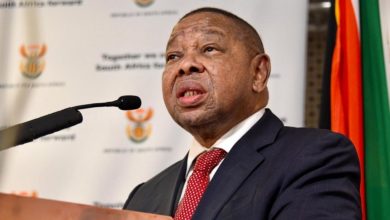 Covid-19: Blade Nzimande concerned as infections on the rise at tertiary institutions ‘I don’t have a magic wand to fix all our problems,’ says new Sedibeng Mayor, Lerato Maloka