This post contains spoilers from Monday’s season finale of The Bachelorette.

Katie Thurston‘s final leg in her journey to find love started with her recovering from Greg Grippo leaving during last week’s hometown dates.

Co-hosts Tayshia Adams and Kaitlyn Bristowe informed Katie’s remaining men, Blake Moynes and Justin Glaze, that Greg exited, but that they’d be able to move on and have their Fantasy Suite dates with Katie.

Katie and Blake began their Fantasy Suite date with a paint balloon fight (basically like a water balloon fight, but with paint). Then they sipped champagne in a hot tub while Katie recapped her difficult last week, during which both Michael Allio and Greg decided to depart the show.

“I’ll be honest, there’s a part of me that wanted to quit,” Katie informed Blake, 30.

Blake responded to Katie with, “That’s a lot.”

To the cameras, Blake expressed some nerves about his relationship with Katie because of how much he realized she cared about Greg. “I love Katie,” Blake said in an on-camera interview. “I love her a lot. But if Katie’s still hung up on Greg and she can’t match that, then there’s no point in getting engaged if she’s having doubts.”

Blake brought up his concerns during the evening portion of their overnight date, but he still wanted to go ahead and tell Katie how he felt.

“It was the one, one part of the night that just solidified things for me,” Blake said of their hometown date. “And it was when you took off your high heels and we were playing hockey. You scored a point and you were backpedaling backwards after you scored it and your hands were in the air and you yelled, ‘Go America!’ And it was when I remembered that moment, that without thinking about it and without trying to think about it, I just realized. I said to myself like, ‘F—, I love her.'”

He doubled down. “I love you and I’m f—ing really excited about life with you,” Blake said.

She quickly found the words. “As much as I want to be stubborn and just do like you, it’s scary and it’s crazy, but I f—ing love you so much and I couldn’t be happier that you’re here,” Katie told Blake.

They celebrated with a trip to the Fantasy Suite, where they shared cheesecake before bed. The next morning, they enjoyed breakfast in bed.

“There’s nothing I’ve ever wanted more than this adventure I think him and I could have together,” she told the cameras.

RELATED: Every Bachelor and Bachelorette Couple: Where Are They Now?

The Bachelorette later told Kaitlyn, 36, that during her time with Blake in the bedroom, she “was plenty satisfied, many times.”

She also informed Kaitlyn about how happy she felt with Blake. “It was just the best day of my life,” Katie gushed, adding, “My heart officially belongs to Blake.”

Given that, Katie no longer wanted to go on her date with Justin.

“I was looking forward to today,” she informed Justin. “However, I did have my overnight with Blake and in that, I did tell him that I’m falling in love with him. And that is something I can only say to one person. And you are someone I wanted to explore things with, but given how I now feel about Blake, knowing I am in love with him, it wouldn’t make sense to have us move forward and go on this date. It wouldn’t make sense to have you meet my family and that’s where I’m at.”

Justin regretted opening up to Katie about his feelings for her and got a bit choked up during the breakup — but eventually, he came around. “I just hope you know how special you are and what you bring to the table,” Justin told Katie. “I hope he knows what he has in you.”

Blake felt pressure to be perfect going into this meeting with Katie’s mom and aunt. “I think because it’s just me that I’m setting high expectations on myself to show why,” Blake confessed to Katie.

Katie assured Blake the meeting would be “casual,” but admitted to cameras that her aunt could be a “tough cookie.”

Aunt Lindsey pulled Blake to chat one-on-one and asked him, “What made you want to go on this season after you flunked out of the last one?”

Blake told Lindsey that he and Katie connected instantly. “We just hit it off,” Blake said. “We just click. I feel like I’ve known her forever.”

That answer did not satisfy Lindsey. “You ultimately mean nothing,” she told him. “I hate to break it to you. You better be secure as f— coming into our family because at the end of the day you’re here because we want you here — not because we need you here.”

Will you accept this rose? Sign up for PEOPLE‘s free weekly Bachelor Nation newsletter to get the latest news on The Bachelor, The Bachelorette and everything in between.

The Canadian did not love how Lindsey took to him.

“It was very clear that Lindsey was more hesitant about me and just kind of questioning what Katie and I are and how we’re going to work through things,” Blake said in an on-camera interview. “All I could say was words to try and reassure her but it just seemed like nothing I was saying was the right answer she was looking for.”

His conversation with Katie’s mom unfolded a bit better. “I’m just excited about giving myself and everything that I know and all the work that I have and all the love because I just know how happy she’s going to be,” Blake told her.

Katie’s mom supported that idea. “I’m just glad to meet you,” she said. “And she seems so happy and that’s all that matters to a parent. You’re going to have struggles, you’re going to have arguments, but if you’re a good fit and if you care about each other as much as you say right now, two years from now, then you’ve done a good thing.”

The mixed reviews from Katie’s family left Blake feeling uneasy about proposing. “It made me think about, are we actually ready for that next step?” Blake said to the cameras.

RELATED VIDEO: The Bachelorette‘s Michael Allio On His Relationship with Katie Thurston and Decision to Go Home

For their last date, Katie and Blake met with energy healer Felicia, who informed them that they’d be partaking in the New Mexico tradition of the burning of the Zozobra. The ceremony involves writing down one’s fears, insecurities and anything holding them back and then burning the paper in hopes of living a better life going forward.

Blake talked about how he had a fear of commitment after seeing failure growing up, but said that Katie helped assuage that concern.

Katie shared her own reservations, which included “uncertainty of what’s to come, the fear of abandonment, the fear of being unaccepted.”

Then they faced their fears. “I’m at a point where I can’t picture life without him,” Katie told the cameras. “I do believe he is my soulmate.”

After Tayshia, 30, FaceTimed Neil Lane and called in some engagement rings, Blake took a look at his options — but didn’t feel 100 percent sure about proposing.

“I’m very unsure and uneasy about the decision that I’m going to make,” Blake divulged. “I love Katie. I love her a lot but the ‘I love you’ that comes with a ring is just different than another ‘I love you.’ It just is.”

Blake took a break from looking at rings with Tayshia to consider the next step. “I don’t know if I’m going to be able to do this,” Blake told the cameras.

Tayshia said to Blake that if he couldn’t commit to proposing to Katie, “then you need to let her go.”

When the time came, though, Blake made a decision.

RELATED: Meet The Bachelorette‘s Blake Moynes, Who Crashed Katie Thurston’s Season for Another Shot at Love

At the proposal site, Katie professed her feelings first.

“That chemistry was instant,” she began to tell Blake. “But I never knew I’d be falling head over heels in love with you. You are caring and supportive and confident and passionate and you love me for me and that’s a love I never even knew existed. The night that you said you loved me changed my life forever because I knew in that moment I wanted to love you for the rest of my life. You and only you. You have made me the happiest woman alive and in a world of change I want to be your constant. I love you today, tomorrow and forever and I can’t wait for our adventure to begin.”

“With you, I just honestly knew,” he told Katie. “And I know how great of a wife you’re going to be, mother you’re going to be, but I know there’s things that scare you. And I know that you in the past have talked about how you’ve had to compromise the way that you are to make relationships work and I don’t want you to do that. But I can’t give you what you came here for. Because you deserve a lot more than that. You deserve the world and I’m excited to support you and be there for you every day moving forward.”

They kissed — and then Blake popped the question.

“That being said, Katie Lane Thurston, will you marry me?” Blake asked.

Katie said yes, and then gave him her final rose.

“This was meant to be,” Katie declared. “Like, this exact moment we were always meant to experience together.”

“This is the start of forever,” Katie said. Then they rode off on horseback to that forever. 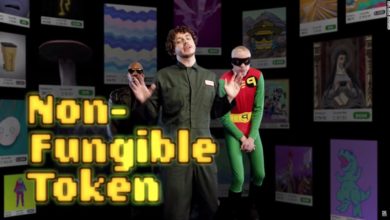 Still not sure what NFTs are? ‘SNL’ explains with Eminem parody