A couple or family huddled around a map, looking puzzled, on a London street corner: I always looked out for them. Depending where exactly I was in the capital, I could confidently predict which landmark they sought.

Outside Waterloo underground station? The London Eye. In the vicinity of Westminster? Not the abbey (instantly identifiable), but Buckingham Palace.

In return for the abundance of help I have received as a stranger in strange lands, I tried my best pre-emptively to ask if visitors needed assistance.

“Seven minutes’ walk,” I liked to prescribe, hoping it conferred my advice with a greater air of reliability than a vague “five or 10”.

For the past 18 months, though, I have found no foreign tourists to point in the right direction. During the series of lockdowns, that was understandable. But now the absence of overseas visitors is the unforgivable consequence of government decisions.

Two years ago, welcoming tourists from abroad was the UK’s third-biggest employer and fifth-largest export earner.

“Pre-pandemic the UK’s inbound tourism industry was the jewel in our crown,” says Joss Croft. He is chief executive of UKinbound, which represents hoteliers, tourist attractions, transport firms and the many other enterprises that depend on overseas visitors.

“It was an international success story, bringing billions of pounds of new money into the country every month, sustaining UK jobs and businesses.”

Compared with everywhere else in Europe, the UK had huge advantages. In particular, London was the world capital of aviation, with tens of millions more inbound airline seats than any other city on the planet. That edge has been squandered: Amsterdam, Paris, Istanbul and Moscow have far more passengers arriving.

“Today the industry sits in tatters, desperate to rebuild but facing barrier upon barrier as it tries to recover,” Mr Croft tells me.

In years to come, business schools will study the remarkable case of how a government chose to destroy its own tourism industry. Because that is precisely what the chaotic, incoherent and constantly changing UK travel restrictions are doing.

Our Covid case rates are way above the vast majority of European countries, yet the UK regards even vaccinated travellers from “green list” countries with suspicion. Who would book a trip to Britain knowing that multiple tests costing around £100 are an absolute minimum? The norm in other nations is for jabbed visitors from low-risk locations to be welcomed without fuss.

No other country insists that only vaccines administered in Europe the US are acceptable, obliging prospective travellers from amber list nations in Asia, the Middle East and Africa to self-isolate – and take further tests. Visitors who are desperate to see loved ones will comply, but those interested in a holiday won’t.

A spokesperson for the Department for Transport said: “We recognise the contribution of international visitors to the economy and have already eased quarantine and testing requirements for fully vaccinated passengers from the EU and US.

“We are continuing to explore the role of vaccinations in shaping a different set of health and testing measures for inbound travel, where safe.”

The UK remains a complete outlier: a high-infection nation with absurdly high barriers to entry that are destroying jobs and damaging the wider economy.

Sooner or later, someone at the Treasury will notice the usual procession of overseas visitors outside the Westminster office window has vanished – along with £28billion in cash each year and the UK’s reputation as a welcoming nation. 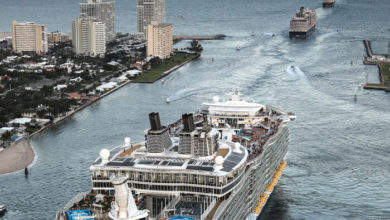