A one-off Aston Martin supercar that is being painstakingly restored to its original glory has received recognition by winning a coveted award in Italy. The Aston Martin Bulldog being restored in the UK By Classic Motor cars in Bridgnorth, Shropshire, has become the youngest car ever to win the prestigious Coppa d’Oro award at the Concorso D’Eleganza at Ville D’ Este on the shore of lake Como.

The Trophy is one of two top awards and is voted for by other entrants to the Concours. More than more than 6,000 hours went into the restoration of the famous Aston Martin concept car, which when it was unveiled by Aston Marin in 1980 quickly became the stuff of legend for car fans around the world.

Only one car was ever built, and its futuristic design and V8 engine took it to 192mph but not the 200mph that Aston Martin had planned. In 1981, Aston Martin fell on hard times and was forced to sell the car to a buyer in the Middle East and it disappeared from view.

Two years ago, the car was found and purchased by car collector Philip Sarofim, who asked Richard Gauntlett the son of the former owner of Aston Martin, Victor Gauntlett, to manage the restoration of the car with the aim of reaching the 200mph it never did when it was built.

Mr Sarofim said: “The win at Ville D’Este is a momentous occasion – to win such a prestigious and historic award on its first competition is a testament to CMCs incredible work and the wild vision of and engineering skill of Aston Martin. The next challenge is to get the car to 200mph, and we will do that later this year at a location which we will announce shortly.”

Tim Griffin the managing director of Classic Motor Cars in Bridgnorth said “The Italian award is a tribute to the team at CMC who will be over the moon about the win.”

In December last year CoventryLive reported on how the restored Bulldog more than impressed on its first high-speed test run. It was just one of three major milestones the Aston Martin Bulldog being restored by Classic Motor Cars (CMC) in Bridgnorth, Shropshire, hit in just nine days.

For starters the car won the Royal Automobile Club restoration of the year award. That was followed by CMC winning specialist of the year at the Octane Historic Motoring Awards.

And on Saturday November 27 last year the car hit 162mph on its first shake-down session. It was the first time in over 40 years that the Bulldog had been driven at speed and the ultimate aim is to see it reach 200mph.

The Bulldog was officially launched on March 27, 1980 at the Bell Hotel at Aston Clinton. The aim was to produce the fastest production car in the world and have a limited production run.

Aston Martin hoped that the car would be capable of reaching a top speed of more than 200mph. When fully restored, the seventies supercar is to be driven to its intended top speed.

Victor Gauntlett, Richard’s father, was chairman at Aston Martin when the supercar which was planned to be the first production car to exceed 200mph. But the project was axed after the car reached nearly 192mph in 1980.

The car was then sold and disappeared, occasionally surfacing around the world. It was purchased by Phillip Sarofim two years ago.

Although the Bulldog was built in the UK, it is left-hand-drive. The Bulldog featured five centre-mounted, hidden headlamps, as well as gull-wing doors.

It was powered by a 5.3-litre V8 with twin turbochargers that produced 600bhp. Inside, the interior was upholstered in leather and used LED buttons like the Lagonda.

Aston Martin planned to build 15-25 Bulldogs but testing and development were curtailed with the car tantalisingly close to its intended top speed, having achieved 192mph miles per hour in testing at the MIRA test track in Nuneaton.

When Victor Gauntlett became chairman of Aston Martin in 1981 he decided the project would be too costly and the Bulldog was shelved. In 1984 Aston Martin sold the only Bulldog to a Middle Eastern collector for £130,000. The Bulldog was later sold to an American collector and spent some time in the United States.

Covid Australia: Deaths and case numbers rise as we head into flu season Growth in sales of electric cars in Limerick despite Covid restrictions 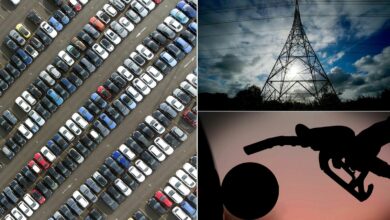 Inflation hits highest level in a decade at 4.2% as fuel and energy bills soar | Business News