Scarlett Johansson isn’t interested in getting political in public.

“I don’t think actors have obligations to have a public role in society,” the 36-year-old actress told The Gentlewoman in a recent interview.

“You didn’t choose to be a politician, you’re an actor,” she added. The “Black Widow” star believes it’s “unfair” to expect that from celebrities who don’t want to offer it.

“Your job [as an actor] is to reflect our experience to ourselves; your job is to be a mirror for an audience, to be able to have an empathetic experience through art. That is what your job is,” Johansson explained.

“Whatever my political views are, all that stuff, I feel most successful when people can sit in a theatre or at home and disappear into a story or a performance and see pieces of themselves, or are able to connect with themselves through this experience of watching this performance or story or interaction between actors or whatever it is,” she continued.

Johansson added: “They’re affected by it and they’re thinking about it, and they feel something. They have an emotional reaction to it – good, bad, uncomfortable, validating, whatever. That’s my job. The other stuff is not my job.”

Scarlett Johansson said she doesn’t want to feel obligated to have a ‘public role in society.’
(David Crotty/Patrick McMullan via Getty Images)

Johansson did speak about her reaction to President Joe Biden winning the 2020 election. “You could hear people losing their minds outside, and I just cried,” she said. “It was a pretty crazy reaction. Oh my God, it’s over. It felt like the end of a war, you know?”

She also reflected on originally defending Woody Allen, who she previously worked with. The director was accused by his adoptive daughter Dylan Farrow of sexual abuse, which Allen has long denied.

“I mean, everyone has a hard time admitting when they’re wrong about stuff, and for all of that to come out publicly, it can be embarrassing,” Johansson said. “To have the experience of, ‘Wow, I was really off mark there,’ or ‘I wasn’t looking at the big picture,’ or ‘I was inconsiderate’ … I’m also a person.”

Heidi Montag didn’t speak to her mom after plastic surgery 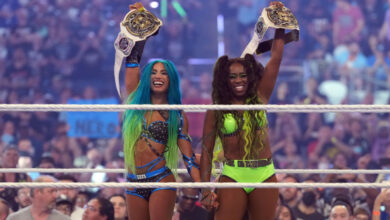