The SA Human Rights Commission (SAHRC) has raised concerns about attacks on the judiciary.

In a statement, SAHRC spokesperson Gushwell Brooks said it was concerning that senior political leaders have been questioning the courts’ authority.

The authority of the courts has been brought into question and criticised while a leaked audio recording of criticism against the judicial commission of inquiry into allegations of state capture [the Zondo commission]; the chairperson of the Zondo commission – Deputy Chief Justice Raymond Zondo – and the action against the former president of the republic, Jacob Zuma, has emerged.

Zuma has refused to co-operate with the commission and threatened a revolt against the judiciary over what he claims is an overexerting of power.

The commission heard testimony from several witnesses about how there were efforts to bribe judges to make judgments in Zuma’s favour.

EFF leader Julius Malema is another political figure who has criticised the judiciary.

FRIDAY BRIEFING | Judicial strife: What Mogoeng, Malema, Zuma and the JSC tell us about the state of law and the courts

He claimed President Cyril Ramaphosa used the court to fight his political opponents.

Brooks said the judiciary’s ability to conduct its work independently was essential for the functioning of democracy.

“The SAHRC will, as part of its strategic focus for the next five years, focus on the impact of corruption on human rights.

“Corruption is a major impediment to development, the alleviation of poverty, the establishment of economic equality and the delivery of socio-economic rights and services for all within South Africa.”

He labelled testimony presented at the commission on corruption as shocking.

“The SAHRC welcomes the progress made by the Zondo commission and calls on senior officials of political parties, including those within the governing party, to ensure that independent judicial processes are left unfettered by party politics.”

Before Covid, giving up flying was taking off. We need to get that momentum back | Green travel 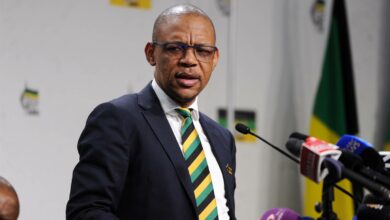 ‘Why are you trusting gossip?’: ANC insists Eastern Cape conference is postponed

What you need to know about SA’s new minister of finance, Enoch Godongwana