ZIFA’s failure to set up a National Dispute Resolution Chamber (NDRC) on time has come back to haunt them amid a simmering contracts row between players, the Footballers Union of Zimbabwe (FUZ) and some Premiership clubs that has also attracted international attention.

This comes as FUZ, backed by their international federation, FIFPro, (the worldwide representative organisation for more than 65,000 professional footballers), have dug in on the need to allow players whose contracts lapsed during the Covid-19 induced break to move to clubs of their choice.

However, the bone of contention between club chiefs, the players and FUZ seems to stem from different interpretations of the manner in which world soccer governing body FIFA handled contracts for those leagues such as those in England, South Africa and Zambia which continued with their championships when global football resumed.

This has set the stage for what could also be costly battles as players fight for what they believe are their rights while clubs also seek to defend that which they believe they are entitled to in terms of the investments they had made into their playing resources even after a year of inactivity.

FIFPro gave the biggest hint of the simmering battles in a letter they sent to the domestic football leadership.

Had ZIFA not reneged on the establishment of the NDRC, it would be the organ that would have been addressing all the wrangles that have emerged between the players on one hand and the clubs on the other.

In a letter dated May 7, 2021, FIFPro acknowledged the contractual problems in Zimbabwe which have stalled player movements as clubs argue that they cannot release players without compensation.

Clubs believe the contracts which expired on December 31, 2020, should be rolled over because players did not serve the purpose for which they were contracted.

Some of the affected players in the contracts saga include striker Newman Sianchali, whose switch from CAPS United to their rivals Dynamos, is still uncertain.

Defender Bryon Madzokere, who has moved to ZPC Kariba from Dynamos, Innocent Mucheneka from CAPS United to FC Platinum and Shadreck Nyahwa from Bulawayo Chiefs to DeMbare are some of the hotly contested moves.

However, FIFPro, who also have the financial muscle to mount a protracted legal battle over the disputes, instructed clubs to release the said players in their letter.

On their part the Premier Soccer League have since advised clubs to provisionally register the affected players pending finalisation of the issue by ZIFA.

“Issues to do with player contracts and movement is a preserve of the football association,” said PSL chief executive officer, Kenny Ndebele.

The association proposed the guidelines to govern the employment contracts.

Gwesela said the guidelines are subject to any other mutual agreement or arrangement that parties might have agreed on. (e) Notwithstanding the aforementioned recommendations, parties are to abide by the contractual obligations in respect to payment of the agreed salaries and other payments due to the players during the subsistence of the contract.

The player contracts issue comes in the wake of a resolution made at the PSL annual meeting recently, which gave clubs the greenlight to roll over contracts of players.

The argument from the club governors was that these players did not offer any services in 2020, despite getting monthly salaries from clubs.

But, there are some clubs who were also not paying players and yet they are demanding a roll-over of contracts.

Army side Black Rhinos have however, cleared Marvelous Mukumba and Andrew Tandi who moved to Ngezi Platinum Stars and Highlanders respectively.

“As Black Rhinos we have always said our standing position is that we follow the regulations and status on the transfer of players, where if the contract expires, it’s incumbent on the player or the club to negotiate for the extension of that contract,” said club secretary Edward Mutukwa.

“We have already cleared Mukumba and Tandi.

“We have one only issue with Harare City on Gareth Madhake where they are insisting on a loan deal for the player whose contract expired”.

The player wrangles have threatened to mar the smooth return of football in Zimbabwe and in the absence of a chamber that specifically deals with such cases, the disputes could drag on and prove even more costly for both ZIFA and the clubs.

When it was first mooted at a football symposium in Victoria Falls in 2019, the NDRC had been envisaged to bring local football in sync with global trends.

It was also hoped that its establishment would be in line with the Club Licensing requirements while  also eliminating bottlenecks encountered locally since both ZIFA and the PSL have separate appeal committees that deal with player and club disputes which results in long and frustrating periods to settle such cases.

ln South Africa, a number of disputes have been resolved by their Dispute Resolution Chamber which was set up in 2015 and which their PSL chairman Irvin Khoza described as a massive game changer for them. 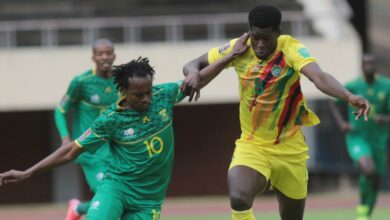 Bafana and Zimbabwe have even record

Masvingo projects on course | The Herald