EV entrepreneur Henrik Fisker has predicted that petrol and diesel cars could fall out of favour with the public well before the UK’s 2030 ban on the sale of new fossil-fuelled vehicles (excluding hybrids).

Speaking to Motoring Research, the founder of the eponymous EV start-up suggested motorists wouldn’t buy a petrol or diesel car for fear of losing money on it. “If you buy a petrol or diesel car in 2023 – who is going to buy that car in 2026? You won’t be allowed to drive into the centre of London or Manchester and everyone hates the car because it is essentially forbidden,” he said.

“It’s like trying to sell a horse to someone who needs to commute to work every day and saying ‘why don’t you just ride that to work?’ It isn’t going to work anymore. Gasoline vehicles could be extinct much faster and the resale value is going to fall.”

Fisker’s company is set to launch its Tesla Model Y-rivalling Ocean EV in the UK in late 2022. He says British customers will pay the same price for vehicles as Americans, because European-bound models will be manufactured by Magna Steyr in Austria.

“Our vehicle has a price of $37,500, which will translate to less than €40,000 (£35,632). We won’t upcharge people in England. Because it is coming from Graz, you don’t have to factor in transport costs from America, so pricing will be pretty similar,” he said.

Specifications for the Ocean are yet to be revealed in full, but Fisker says it has a maximum range of 350 miles, calculated using the American testing cycle, so he expects the European test to record a higher figure.

Like Tesla, Fisker said the Ocean will be fitted with ‘fun’ features: “I know in England it can suddenly start raining and we are planning a special ‘UK mode’ which we will announce closer to the launch,” he teased.

Fisker did, however, take a swipe at his Californian rival over its decision to build up its own Supercharger network and socket design.

Fisker confirmed the Ocean will be fitted with a CCS plug and will be able to accept a charging speed that adds 100 miles of range within 10 minutes. 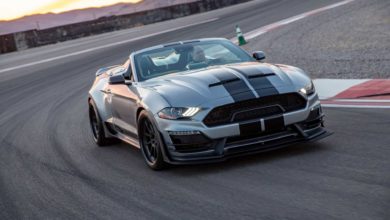