Oil prices slumped Thursday, a day after spiking over the closure of the Suez canal, while stocks grappled with nagging pandemic concerns and inflation fears.

Both Paris and Frankfurt stocks finished with small gains after having spent most of the day lower as dealers dwelled on worries about rising Covid-19 infections, renewed restrictions and vaccine struggles across much of Europe.

London fell as shares in energy companies were hit by the drop in oil prices.

Wall Street finished higher as traders moved out of the tech-rich Nasdaq and into cyclical equities on the Dow and S&P 500.

The rotation, which began in recent weeks, continued after government data showed new US unemployment claims last week coming in lower than expected and dropping below 700 000 for the first time since the pandemic.

“Nasdaq stocks were treated at a very high valuable stocks when interest rates were zero, but the more the interest rates start to go up, the valuation compresses tremendously,” Boris Schlossberg of BK Asset Management said.

The prospect of a strong economic rebound has stoked fears that prices will soar, forcing central banks to reel in ultra-low monetary policies that have supported the rally in global equities.

That has led to volatile trading as US stocks have pushed to record highs. All indices finished higher but off their peaks on Thursday, with the Dow gaining the most at 0.6%, and the Nasdaq the least at 0.1%.

“Reading between the lines, markets appear to have taken that to mean the Fed might feel compelled to pare back some of its own extraordinary measures sooner than expected, thus prompting some further profit taking from recent peaks,” said Hewson.

Crude prices had jumped by almost six percent on Wednesday in response to a giant container ship getting stuck in the Suez Canal, blocking one of the world’s busiest shipping routes.

But oil prices tumbled on Thursday, completely wiping out those gains at one point.

“Oil prices corrected excess gains that accumulated from the Suez Canal blockade as the disruption’s effect is likely not one that will last too long,” said Bjornar Tonhaugen at energy consultancy Rystad.

Egypt closed the canal on Thursday and there were warnings it could take weeks to free the container ship.

Although the canal is responsible for the transit of 10% of global oil production, following the initial shock traders have returned to larger concerns about the impact of pandemic lockdowns on the economy.

“Crude prices are lower as the short-term demand outlook continues to get downgraded as many European countries seem nowhere near to easing restrictions,” said OANDA analyst Edward Moya.

Oil prices had tumbled by similar amounts on Tuesday on such worries about energy demand given renewed Covid-19 lockdowns. 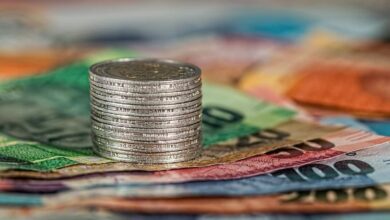