Elita Chikwati
Senior Agriculture Reporter
Old offer letters for resettlement land and land permits are being replaced with new documents that have improved security features to curb illegal parcelling out of land and weed out fake offer letters.

Most people who obtained an offer letter legally and have been using their land will have little trouble getting the new document, basically just signing a form.

New guidelines for the allocation of A1 plots have been distributed to provinces and districts to curb illegal land allocations as part of the process of cleaning out corrupt officials and what amounts to rural land barons.

There have been a growing number of reports of fake offer letters, and people being conned to pay a bribe to a dishonest official or a fee to a criminal who claimed contacts with officials, despite the fact that land allocation is done for free.

Some culprits have already been arrested and brought before the courts.

President Mnangagwa recently encouraged all Zimbabweans to follow due process in acquiring land, while warning invaders that they could not succeed.

Lands, Agriculture Fisheries, Water and Rural Resettlement Minister Anxious Masuka said all offer letters will now have improved security features, and are issued through the province and districts, upon signing the requisite acceptance and acknowledgement forms.

“A1 farmers received their permits from Lands Officers from 2014 onwards or from other authorities prior to 2014. To further curtail illegal land allocation, a new permit with improved security features will also be issued,” he said.

Minister Masuka said while every Zimbabwean had the right to land, due process should be followed in applying for land.

“It is the responsibility of the State, not individuals, to alienate agricultural land.

“As we follow the President’s directive to weed out invaders, law-abiding Zimbabweans are urged to assist Government in exposing land invaders, including their handlers and masters. Land invaders — you have been warned,” he said.

The current policy position on land redistribution focusses on identifying for re-allocation land from multiple farm ownership, abandoned farms, under-used farms, derelict farms and farms found to be above the maximum size for the ecological zone.

Applications for land are made through the district committees and vetted by the provincial committees.

Minister Masuka said the waiting lists were in excess of 250 000 across all provinces because of the soaring demand for agricultural land.

“Unfortunately, not every Zimbabwean wishing to get land will be allocated land. However, one does not have to own land to undertake farming or engage in a profitable agricultural business.

“Government has recently approved a Joint Venture Agreement Framework such that investors can legally farm with the consent of Government.

‘‘This method allows for access to agricultural land for production purposes while ensuring there is skills transfer to the land reform beneficiaries,” he said.

Minister Masuka said continued reports of corruption across all land categories were worrisome and Government did not tolerate any unbecoming behaviour that is prejudicial to the cherished land reform programme.

“We must collectively fight corruption. Please report any suspected case of corruption to the nearest provincial or district lands office, or the police or the Zimbabwe Anti-Corruption Commission. The Minister’s office is also open to receive any such complaints or reports.

“The public is advised that no payment is required for any of the processes associated with the application, vetting and allocation of agricultural land,” he said.

I’m getting a lot of love from Zim: Leicester City star 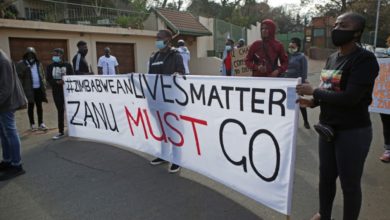