Farmers in the Leonardville area of Omaheke region have vowed to put a stop to uranium exploration by Russian entity Headspring Investment.

Their main concern is the potential pollution with radioactive minerals of the underground water resource that covers the Stampriet Artesian Basin (SAB) aquifer, the largest artesian basin in the country, which covers 60 000 square kilometres in south-east Namibia, and expands into neighbouring Botswana and South Africa.

It is not just the Russian company that has uranium exploration licences for the area.

The entire SAB area is covered with exclusive prospecting licences (EPLs) that stretches over 690 000 hectares and more than 170 farms for two high-quality uranium ore bodies.

in the SAB aquifer area. It is understood the company has already been drilling 1 000 boreholes in the area over the last 10 years, geologist Roy Miller said the company has neither confirmed nor denied during public consultation meetings held in late September.

There have so far been four meetings – two in Windhoek and two at Leonardville – and more are anticipated to take place.

The company has applied for an environmental clearance certificate (ECC) from the Ministry of Environment and Tourism (MET) to forge ahead with its plans. MET last week said a decision in this regard has not yet been taken.

According to Environmental Compliance Consultancy, which does the ESIA for Headspring, the company intends to develop a well field and installation of a test mining station to assess the sustainability of the proposed in-situ leaching method to extract uranium.

Farmers in the region have in the meantime called on the Namibia Agricultural Union (NAU) to support Namibian landowners – that include commercial and communal farmers, and tourism entities – to investigate, explain, and prevent the venture from going ahead.

“We have got to stop things that do not make sense. This one does not make sense,” warned Miller at an information meeting at the NAU office in Windhoek late last month. “Development of uranium in any drinking water aquifer must be prevented.”

Headspring’s consultancy firm said the impact on the water resources has not yet been determined, and that the impact flagged during the scoping process, requires further investigation and assessment.

It said it has retained a specialist to peer review the investigation into the groundwater and water resources, and will assess the risks with the new information and propose suitable water management options.

Headspring is a subsidiary of the Russian state-owned nuclear energy corporation ROSATOM’S Uranium One Group, an international mining company.

It is one of the world’s largest uranium producers and is active in Russia, Kazakhstan, the United States of America, Tanzania, with a presence now in Namibia.

It said all its mines have International Organisation of Standardisation (ISO) certification standards, and that the Namibian operation would similarly subscribe to these.

The company explains its in-situ recovery method as “progressive technology of uranium mining with a closed cycle for [the] leaching solution”.

A reagent is added and the water with the leaching solution is then pumped back into the ground.

The company says the advantages of this method is that it is “more environmentally friendly” when compared to conventional open-pit and underground mining.

This, it says, is because there is less landscape disturbance, with no waste rock dumps, no tailing storage, and the aquifer ‘self-restores’.

This method, it says, also requires low capital inputs and operational costs. In fact, it says Uranium One has the lowest cost of uranium production worldwide.

It is precisely what you cannot see on the surface where the rub lies, said geologist Miller.

For now, the SAB – the only water source, of which 100% is underground in the otherwise waterless Kalahari region – is “top drinking water” that sustains people, animals, and plant life.

Irrigation is by far the biggest usage of water in the SAB area. With the underground water moving along a downward slope, about 92% of the irrigation and town areas are south of the proposed mining areas.

According to Miller, the leach solution, in this case, is a weak sulphuric acid – battery acid – that will get recycled over and over into the groundwater through the porous ore body, a continuous recycling of the leach solution into the only water supply in the area.

This recycling can be 100 or more times over for a period of several months or even up to five years.

While 60% to 80% of uranium is recovered at the processing plant, the rest – at least 20% thereof – remains undissolved in the ore body.

And, typically as is the case with this method, is that new wells are continually added as leaching progresses along the ore body.

What compounds the threat to the underground water in the SAB, is that all aquifers are in contact with one another. If one gets contaminated, the contamination of the rest is “highly probable”.

Miller said exploration and production drilling releases fine rock powder that contains uranium and radioactive decay products of uranium into the drinking water of the aquifers.

He claimed that a Headspring company representative at one of the public meetings acknowledged that water may not be drunk in drilling areas.

In Kazakhstan, it is forbidden to drink groundwater from an area of 150 kilometres by 15 kilometres in size in a mining area.

The radioactive decay products released in the process include radium, radon, thorium, and uranium – all highly radioactive minerals.

“We are dealing with abnormally high concentrations of dissolved uranium and dissolved heavy metals, all in the drinking water,” said Miller.

He said the surface processing does not remove other metals, or radioactive decay products, nor the sulphuric acid. This means that at the end of the processing, uranium and the other chemicals remain in the water that is being pumped back into the underground water system.

The World Health Organisation’s (WHO) guideline for uranium in drinking water is 0.030 milligrams per litre. If just 1% of 500 grams per ton of uranium remains in the groundwater, it will exceed the WHO guidelines by 167 times.

“What will happen if just a tiny amount of leachate escapes into the aquifer?” questioned Miller.

The company at the public meetings said it wants to rehabilitate the underground water here as it does elsewhere. But, said Miller, the geography here is different, and rehabilitation can take hundreds of years.

The rehabilitation of a similar in-situ process at Königstein in the former East Germany where three aquifers got contaminated took 30 years – from 1991 to 2021 – and cost Euro 6.5 billion.

The general consensus among the Leonardville farming community is that the Namibian government is slow to act or listen to the concerns of the locals.

“A lot of things have deceptively been done so far. Nobody is doing anything for the goodwill of the people and society,” claimed a farmer in the Leonardville area, Divan Opperman. “We must make sure that our heritage, our farms, our cattle, are protected.”

However, Saima Angula, deputy director of environmental assessment, waste management, pollution control and inspection at the ministry of environment said the ministry is “also concerned”, adding that there are ongoing cross-ministerial consultations.

Unam professor Mutjinde Katjiua, who specialises in conservation ecology, underscored the Namibian constitution clearly stipulates that any activity or development in Namibia must safeguard the environment for future generations.

“The Stampriet water is a strategic resource for the country and therefore, it is Namibia’s obligation to protect it,” Katjiua said. – newsroom@nepc.com.na 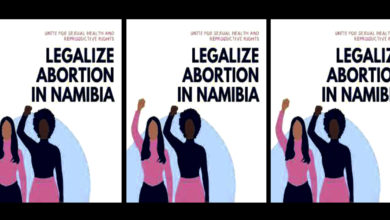 Care and compassion over colonialism: Namibia must prot…