Political Editor
Opposition functionaries have been selling bottled smoke to supporters misleading them on the Executive position on a proposal made in Parliament about a Patriotic Bill, whose contents are still unknown.

The proposed law, that is being pushed by parliamentarians, who have a constitutional role to do so, is now being treated as a passed piece of legislation by the MDC Alliance although it is still in its preliminary stages.

Insiders questioned why the MDC-A is misleading its supporters and some embassies into believing that the law is being sponsored by the Government when it is individual legislators who are pushing the motion.

Opposition figures, notably the MDC-A vice president Tendai Biti have been making a lot of noise around the proposed law, apportioning it to Government when it is Parliament, from where he was recently recalled by his party.

In an interview, Zanu PF chief whip Cde Pupurai Togarepi said it was not surprising that Mr Biti is apoplectic given his past actions that are deemed unpatriotic.

“This is our proposed law, as legislators who represent the people, we are duty-bound to push their interests. When they were in Parliament, we engaged the likes of Biti, but they have ignored that, our representatives in Parliament then decided to move a motion, mind you, this has not started today, it has been raised before as we have watched them campaigning for the imposition of sanctions with no repercussions,” he said.

Last year Mr Biti wrote a letter to the World Bank Group president David Malpass pleading to the world financial institution not to lend Zimbabwe any money when the country was struggling with the Covid-19  pandemic.

“It is for that reason that we are pushing the Patriotic Bill, because it’s the people in the constituencies who are suffering from the unpatriotic actions of people like Biti and the MDC-A lot.

“As a matter of fact, we are concerned that the Executive is not bringing that Bill to Parliament. We are representatives of the people and it is people who are pushing us,” said Cde Togarepi.

Cabinet last year approved the draft of a proposed law that penalises citizens who campaign for the continued impositions of sanctions or those whose actions are against the country’s national interests. 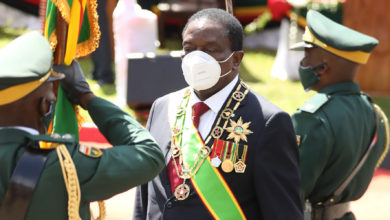 Zimbabwe at 41 years of independence