Suspended ANC secretary-general Ace Magashule is unrepentant about his “letter of suspension” to party president Cyril Ramaphosa, and has asked a court to reverse his own suspension and declare Ramaphosa suspended instead.

Court papers that Magashule served on the ANC, Ramaphosa – in his personal and ANC capacity – and deputy secretary-general Jessie Duarte surfaced on Friday morning.

In it, Magashule asks the Gauteng High Court in Johannesburg to hear the case on 1 June on an urgent basis.

Magashule wants the “ANC step-aside rule or regime and/or Rule 25.70 of the ANC constitution” – as well as his suspension letter from Ramaphosa – to be declared “to be unlawful, unconstitutional, invalid and null and/or void”.

In turn, he wants his suspension of Ramaphosa to be declared valid and effective until lawfully nullified, and that the instruction for him to apologise to Ramaphosa for attempting to suspend him be declared “unlawful and unenforceable”.

READ | Magashule set to apologise, ‘but with strings attached’ – sources

Magashule says he wrote the letter of suspension to Ramaphosa on the grounds that the ANC president had used money to influence a party conference outcome. Magashule also claims to have written it before Ramaphosa wrote a letter suspending him because of corruption charges.

He said he had wanted to deliver Ramaphosa’s letter physically, “out of respect for the office he holds”, and that this was the reason for the delay.

In the 128-page application, Magashule repeats the allegations he has made about his suspension in more detail, painting himself as a victim of Ramaphosa’s CR17 faction in the party.

He also relies on a transcript of the leaks of audio recordings from the last national executive committee meeting, which appear to back up these claims.

He says the fact that Ramaphosa’s suspension wasn’t put into effect “clear evidence of selective justice”.

The ANC has argued that there is nothing in the party’s constitution that gives the party’s secretary-general the power to unilaterally suspend a member, and therefore Magashule’s letter was not valid.

The party’s NEC at its weekend meeting resolved that Magashule should apologise to the party and South Africans for writing this letter, but no clear deadline was given.

There were indications that the deadline was set for the end of the week, or Friday. 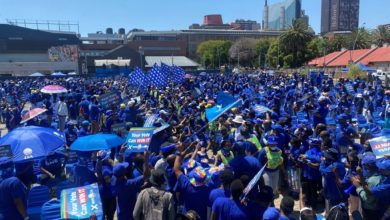 Medupi explosion: Eskom lays charges, but staff not being investigated for sabotage