By Joe Davies For Mailonline

Shocking footage shows men punching, kicking and hitting each other with suitcases in the shopping area of the airport at around 8am.

An onlooker told MailOnline the fight broke out after a man threw a bottle at another who was insulting a woman he was travelling with.

Other passengers shouted ‘stop’ as the group attacked each other on the chairs in the waiting area.

Police are investigating the fight and the airport has apologised to other passengers who were affected. 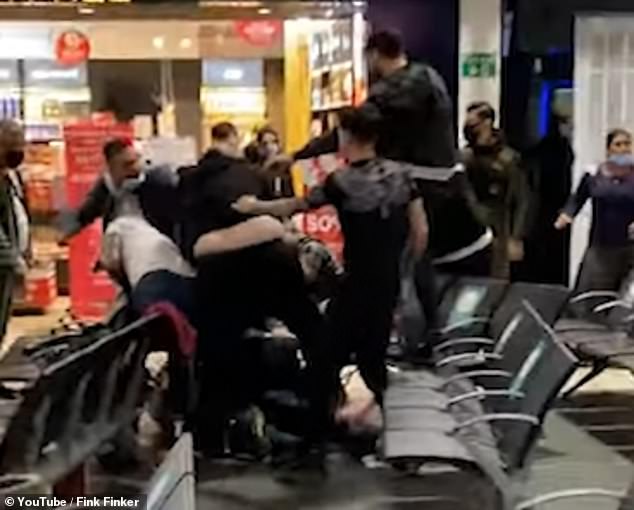 Men brawl over the waiting area chairs in London Luton Airport at 8am yesterday. Police made 17 arrests

In the video, a group of men surround someone on the floor, kicking and stamping on the floor.

They break into fist fights before moving their way into the seating area and clambering over chairs.

A man tries to pick up a bin as a weapon before discarding it as onlookers keep their distance.

Some of the fights are disbanded before the group charge into another part of the airport.

One of the passengers in the airport told MailOnline: ‘There was an exchange of words between the women, and then they started arguing, screaming. I did not understand this language, but it was easy to see what was happening.

‘Then one of the boys broke into an argument between them and insulted the other woman.

‘This boy didn’t know there was a guy from the opposite group behind him who threw a bottle at his head and hit him perfectly in the back of the head. 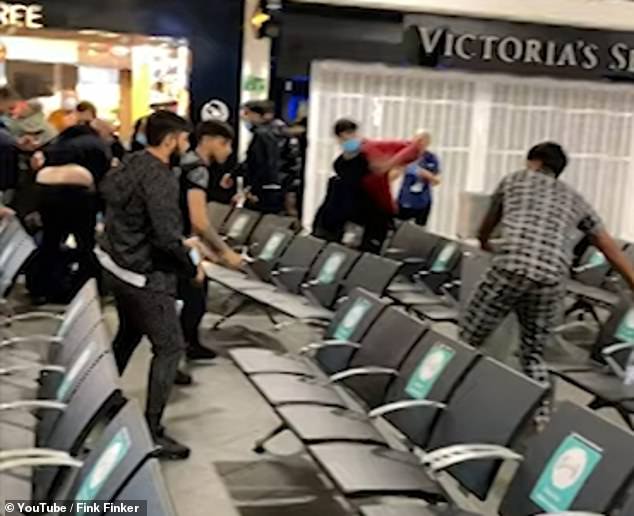 ‘Then the fight began. One boy was dug hard on the floor, it lasted about a minute. The whole situation lasted about 5 minutes and there was no security.

‘The people around me that I spoke to said they were afraid for their own life or health. They threw Coke bottles at each other

‘When the fight broke up, they began to close the store behind them. All the aggressors totally disregarded the airport security services.’

Bedfordshire Police said: ‘Police were made aware of a violent disorder at London Luton Airport.

‘Four people were injured, and three were taken to hospital with serious injuries.

‘Subsequently, 17 people were arrested and remain in police custody for questioning.’

Luton Airport said: ‘We are shocked and saddened by this isolated incident.

‘We take a zero tolerance approach to violence and continue to assist the police with their enquiries.

‘We would like to apologise to any passengers affected.’

Heathrow and Gatwick: The newly added country to the green list that only costs £17 for a return flight from London 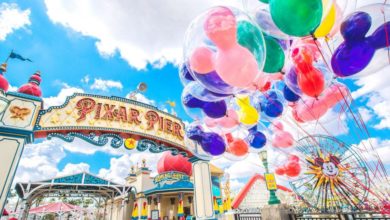