It was a little over a month ago when Kia formally retired the Cadenza / K7 by revealing exterior images of the all-new K8 before showing the fancy cabin at the beginning of March. Fast forward to today, we finally have the technical specifications of what will be a larger car since the sedan now stretches at 5,015 millimeters (197.4 inches) long.

Starting from the top to the bottom, the flagship K8 is powered by a 3.5-liter V6 gasoline engine producing 296 horsepower (221 kilowatts) or an extra six ponies compared to the Cadenza’s 3.3-liter V6. Torque is also up, now at 265 pound-feet (359 Newton-meters) or 12 lb-ft (16 Nm) more than the defunct sedan. While the horsepower and torque bump is marginal, a more important novelty is the addition of an all-wheel-drive system for this top-tier variant.

Interestingly, Kia will sell the 3.5-liter engine with liquid propane injection (LPI) alongside the gasoline direct injection (GDI), in which case the six-cylinder unit is rated with a lower output of 237 horsepower (177 kW) and 232 lb-ft (314 Nm). There’s no word about a diesel for the time being, which could be a sign there won’t be a CRDi-powered K8.

The midrange K8 will rely on a smaller four-cylinder, 2.5-liter powertrain producing 195 hp (145 kW) and a peak torque of 183 lb-ft (248 Nm). Both the 3.5 and 2.5 engines will be hooked up to an eight-speed automatic transmission. A base variant is also planned with a 1.6-liter engine and is scheduled to arrive in the following months.

Beyond the oily bits, Kia says the Cadenza-replacing large sedan uses a MacPherson strut front and multi-link rear suspension while shaving off the noise, vibration, and harshness (NVH) levels thanks to beefier sound-deadening materials. For example, the South Korean brand points out a triple sealing solution for the doors it says “dramatically reduces unwanted noises.”

Not only is the exterior a vast departure from the old Cadenza, but the cabin has an air of sophistication previously unavailable. One feature that caught our eye is the “smart support” function for the driver’s seat. It’s activated either when the sport mode is turned on or automatically once the K8 surpasses 81 mph (130 km/h). What it does is lower the height of the hip area of the seat as well as strengthen the support to the side bolsters.

The list of goodies is quite extensive as it includes everything from ventilated seats and a 12-inch head-up display to Kia’s first Meridian sound system (with 14 speakers) and a pair of 12-inch digital screens. Navigation-based adaptive cruise control is also part of the package, as is a surround-view camera system.

Kia will have the all-new K8 on sale next month, initially at home in South Korea before reaching global markets. The revamped posh sedan has already been ruled out for the time being in the US where the larger K900 has also been axed. Positioned above the Rio, Forte, and K5 sedans, the sporty Stinger is still available stateside and was recently given a nip and tuck with more power for the 2022 model year.

Fiat to sell only electric cars 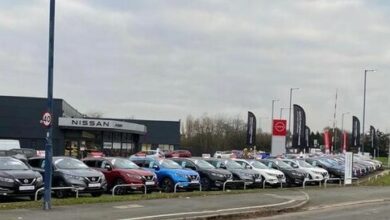 New Campaign Reminds Motorists to ‘Slow Down, Move Over’ | Government