Kenya, which has so far had at least 111 185 cases and 1 899 deaths, reported 829 new infections on Thursday, the highest daily number since last year.

In a televised address, Kenyatta said the positive test rate hit 13% in March compared to January’s 2%.

“Unfortunately, it is still rising,” he said.

Lockdowns and other restrictions have stifled revenues and hampered growth.

“Last year, fellow Kenyans, the Kenyan economy was projected to grow by 6.2%, but it only grew by 0.6% because of the Covid-19 pandemic,” Kenyatta said, adding that the economy was likely to bounce back and grow by approximately 7% in 2021.

Kenya plans to vaccinate 1.25 million people by June and another 9.6 million in the next phase.

The ministry of health said this week that the country plans to vaccinate about 15 million people nationwide, about 30% of the country’s population, by the end of June 2023. 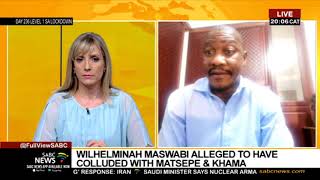 The WHO says Marburg virus has the potential to ‘spread far and wide’, after fatal case in West Africa