Just over half of people in the United States are fully vaccinated against Covid-19, according to data from the Centers for Disease Control and Prevention updated Saturday.

The milestone comes eight months after the first vaccine – produced by Pfizer and BioNTech – was given an emergency use authorisation by the US Food and Drug Administration on December 11 last year. The Moderna vaccine was given the same authorization later in December, and the single-shot Johnson & Johson vaccine was authorised in February.

None of the vaccines have received official approval from the FDA, though officials are reportedly aiming to have approval for the Pfizer shot by early September, The New York Times reported.

The Pfizer vaccine is authorized for use in children aged 12-15, though none of the vaccines are currently authorized for children under the age of 12. The Centers for Disease Control and Prevention recommend students and staff mask up when they return to the classroom regardless of their vaccination status.

US officials are working to push the vaccine and stress its safety amid continued vaccine hesitancy among some Americans as the more contagious Delta variant causes a surge in cases across the US, especially in areas with low vaccination rates. While vaccinated individuals can contract and spread the virus, data and experts suggest the vaccine is effective in staving off serious illness and death.

The number of people in the US receiving the first dose of a vaccine series each week almost doubled over the past month, Politico reported. The largest increase came in states with lower vaccination rates and in areas where hospitalizations and deaths are rising due to the latest surge, according to the report.

The milestone also comes as vaccine mandates become more common. Employees of the federal government will soon be required to get the shot or face regular testing for Covid-19. Major corporations including United Airlines and Walmart have also announced vaccine mandates for employees. 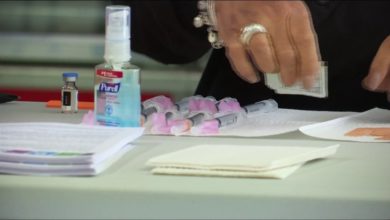