Jennifer Lopez and Ben Affleck gave the world another shot in the arm of their worldwide lovefest when the parading pair were spotted lovey-dovey aboard another boat – this time along the Mediterranean Sea.

Lopez, who just ushered in her 52nd birthday days ago, took it upon themselves to share a kiss while cozied up as their boat was docked in Naples, Italy.

Having just left Saint Tropez in the south of France, the re-burgeoning couple traded in a superyacht for the intimate confines of a much smaller vessel but make no mistake, Lopez and Affleck aren’t light on living lavishly.

MATT DAMON REVEALS THE ONE THING THAT HAS BEEN DIFFERENT ABOUT JENNIFER LOPEZ, BEN AFFLECK’S REKINDLED ROMANCE

Hollywood couple Jennifer Lopez and Ben Affleck pack on the PDA as they embraced in a kiss on a dock in the port of Naples, Italy.
(Backgrid)

Earlier this month, Bennifer 2.0 toured a palatial estate with Lopez’s kids Max and Emme in the famed Holmby Hills section of Los Angeles. The property is priced at a cool $65 million and includes eight bedrooms and 12 bathrooms across some 31,000 square feet. It also includes a bowling alley.

The multihyphenate was later spotted touring a new development and in the snapshots, the singer is seen climbing a ladder with someone who appeared to be an architect and was showing her the property while exploring the Bel Air home which is still under construction.

For the outing, the actress donned black leggings, a white sports crop top and white sneakers as she took her time walking around and discussing the structure’s floorplans.

Lopez has also been seen perusing area schools for her kids – an indication that she could be looking to kick it on the West Coast on a more permanent basis.

The “Hustlers” star and “The Way Back” actor were previously engaged for roughly two years. The two split in 2004 and Affleck went on to marry actress Jennifer Garner in 2005. The pair – who share three children together – divorced in 2018.

Melora Hardin's Tango – Dancing with the Stars – Dancing With The Stars 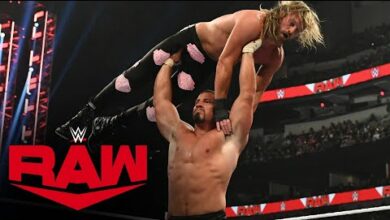