One in seven people in the United Kingdom is foreign-born. Several million British citizens live overseas. I am one of tens of millions in this country likely to have family abroad. For us, international travel restrictions are lockdown in a bigger box – only longer and with barely a break between waves. Most haven’t seen loved ones in a year, two, more. Yet, our families have been ignored by the government and by most of this country’s media.

“Hols on hold,” wrote the Metro. “Hope for holidays overseas,” The Times. “Allowing summer holidays abroad risks another lockdown, Johnson is warned,” The Guardian. “English seeking sunshine abroad face hefty new fines,” Reuters. If the British media are to be believed, the only reason to ever leave this country is a cheeky weekend in Spain.

While holidays remain the most frequent reason for foreign travel, visiting friends or relatives abroad is the second, accounting for about a quarter of international trips in 2019, more than twice the volume of business travel. The distinction matters. It’s not holidays; it’s simple days when the bonds of family are renewed around a kitchen table. It’s catching a few more memories with an ageing parent, putting in the time to make a long-distance romantic relationship work or throwing a ball around with your children. Some of us travel five miles to help mum fix the WiFi. For others, it takes two planes and a long bus ride.

Let me be absolutely clear: I do not contest the necessity of travel restrictions, only the way they are framed and perhaps adapted. The government said rules could loosen from 17 May, but has been uncharacteristically cautious in its language. The transport secretary, Grant Shapps, is due to submit a report on the next steps on 12 April. He’s so far not given any hint that transnational families might be treated any differently from holidaymakers. Scientists are increasingly making clear they do not support easing foreign travel any time this summer. One Sage adviser casually suggested not to book until 2022.

Only a dead or dying relative would permit you out of the country now. Mandatory testing and quarantines add a financial wall most simply cannot scale. Rules must align with the country of arrival and the company you travel with, each border another fire breaker. Then immigrants face one final hurdle: they need to be able to trust that they can return. Too long an absence from the UK could mean losing your immigration rights. The Home Office has offered no relief.

Meliha Bajramovic, a British citizen, has been stuck in her family town of Zenica, Bosnia, since February 2020. Her elderly mother remains in London. Mary Eligu Wooldridge, 23, can’t obtain a visa for her Ugandan husband, so can’t move back to the UK. She hasn’t seen her parents since her 2018 wedding, not even when her dad was battling cancer last year. Alexander Bailey managed a rushed trip to France between coronavirus waves last summer to catch a few days with his 10-year-old daughter. He hasn’t seen her since. The stories are many, the anguish all too real. Just have a look at #LoveIsNotTourism.

The same can be said of many families spread across the UK. We’ve all known the pain of separation this past year and I will not engage in comparative suffering. I’ve been luckier than most. With the flexibility of being a self-employed, childless, remote worker, I could hop in the car whenever a window opened and saw my parents in France a couple of times last year. This year is proving harder. As countries get their own situation under control, they become fearful of opening up to unvaccinated people and of importing new variants. While domestic rules loosen, borders tighten. This could last years.

Ensuring that this is our last lockdown, that the NHS is not overwhelmed, that as few people as possible die before we are all vaccinated is everyone’s top priority. Restrictions are necessary. But could we at least acknowledge – and perhaps mitigate – the fact that millions of people are missing a lot more than a tan and a poolside cocktail? While the tabloids clamour for travel corridors to Greece or Spain, let’s also consider Poland, Romania or Pakistan.

Isabelle Roughol is an independent journalist and the host of Borderline, a podcast and newsletter about lives lived across borders. 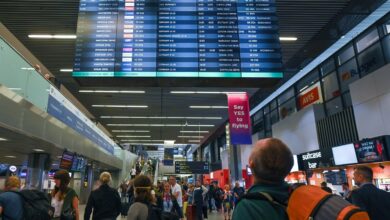 15 great US escapes to satisfy your craving for Americana – Telegraph.co.uk