Sign up to myFT Daily Digest to be the first to know about InterContinental Hotels Group PLC news.

InterContinental Hotel Group, owner of Crowne Plaza and Holiday Inn, is to launch a new brand targeting the luxury leisure market in a bid to keep pace with rivals as growth across the group slows.

IHG said on Tuesday that it would announce the new brand “in coming weeks” but that it would add to its portfolio of high-end hotel chains including Six Senses and Kimpton, which represent almost a third of the group’s revenue.

It hopes that independent hoteliers, struggling from months of closure during the pandemic, will sign up as they seek the marketing power of larger brands as travel begins to recover.

The group said that existing hoteliers signing up to its brands had represented a quarter of its new hotels in the past 18 months.

Compared with rivals Marriott and Hilton, IHG has reported much slower rates of growth across its hotel estate. It increased its hotel numbers 0.1 per cent in the first half of the year compared with rates of about 3 to 5 per cent at other hotel companies.

In 2019, the net growth of IHG’s hotel estate was about 5 per cent, which it said was “the strongest in over a decade”.

IHG said, however, that it was reviewing around 200 hotels in its Holiday Inn and Crowne Plaza brands and had closed 56 since the beginning of the year.

Revenue recovery was slowest in Europe, Middle East and Africa, despite the rapid rollout of vaccines in Europe, with revenue per available room — the industry’s preferred metric — 65 per cent below 2019 levels in the region compared with 16 per cent below 2019 in Greater China and 26 per cent lower in the Americas in the six months to the end of June.

Flight attendants use tape more often than you think 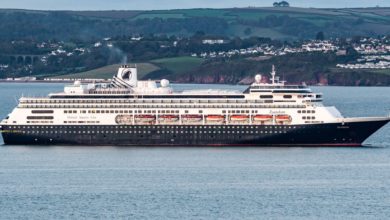