The chances are you might be driving a hydrogen family car – as opposed to a battery-powered one – within 20 years.

uch a prediction is feasible after Hyundai promised to “popularise hydrogen” as an alternative to battery-powered EVs.

It follows its commitment this week to having its worldwide vehicle fleet all-electric in 2040 by announcing its commitment to making hydrogen fuel-cell electric cars (FCEVs) on a grand scale.

And it is such a major player its decision will have massive repercussions.

Significantly it reckons FCEVs will cost much the same as battery-EV counterparts by as early as 2030.

First up in the private cars segment will be a new hybrid sports car, known as Vision FK, currently at the concept stage.

It is estimated to be capable of 670bhp+ and have a range of around 600km.

The concept represents the first physical sign they will combine battery and hydrogen power sources.

The company says its Hydrogen Vision 2040 is aimed at popularising the fuel for ‘everyone, everything and everywhere’.

It plans to introduce a next-generation fuel cell system (100kW and 200kW variations) in 2023 with costs being lowered by more than 50pc.

And it aims to become “the first automaker to apply fuel cell systems to all commercial vehicle models by 2028”.

I wonder what the EV scenario generally will be like by the time the likes of the Volkswagen I.D. Life arrives in 2025.

It was a key reveal as it is aimed at the lower-price end of the market and is two years ahead of planned production. It will cost about €25,000.

“The customer of tomorrow won’t simply want to get from A to B; they will be much more interested in the experiences that a car can offer.”

Another key exhibit at Munich was the Mercedes EQE, the all-electric equivalent of the E-Class.

It is expected to be on sale here next March. Prices will be announced around then.

An important development for Renault was the rollout of the Mégane E-Tech full electric vehicle.

They claim there are as many as 26 Advanced Driver Assistance Systems (ADAS).

All upholstery is made of 100pc recycled materials; 95pc of the vehicle will be recycled at the end of its life.

A coupe version of the Skoda ENAQ electric vehicle was announced pre-show.

Nearly everything in Munich was electric but we had a ‘Renault show’ here on Monday with the new Arkana SUV launched in hybrid and mild-hybrid guise.

I’ll have a review of my drive in it in Saturday’s paper. It is Renault’s first purpose-built hybrid, and its first SUV with coupé styling. Prices start from €28,990.

Dacia yesterday announced details of the latest Duster enhancements while, previous to that, it detailed its new seven-seater MPV, the Jogger. Expect the Jogger here in the first quarter of next year. A hybrid model – a first for Dacia – will follow in 2023. 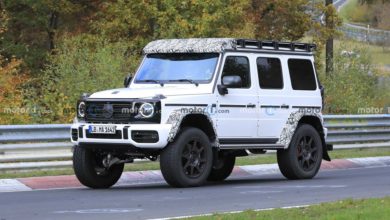