The largest aircraft in the world found itself in Namibia yesterday, touching down at Windhoek’s Hosea Kutako international airport in the afternoon. Arriving in the country to deliver medical aid from Germany, the aircraft was in the air once again several hours later, with a flight up to Accra, Ghana.

According to Allgemeine Zeitung, the An-225 was dispatched to the southwestern African nation from Germany, carrying the first of three medical aid shipments. The aircraft and its precious cargo were met by a number of VIPs, including the EU and German ambassadors to Namibia. The reason for the special welcome was due to the fact that the supplies were a donation from Germany.

Speaking to the media yesterday, the Namibian Minister for International Relations highlighted the need for more medical supplies in his country, urging Namibian diplomatic missions abroad to mobilize support:

“Namibia has submitted an official application for assistance with the EU civil protection process through the embassy in Belgium,” -Netumbo Nandi-Ndaitwah, Minister for International Relations and Cooperation of Namibia

Specifics of the aircraft’s journey

The Antonov An-225 registered UR-82060 left its home in Kyiv (Ukraine) on July 5th, making a short journey to Leipzig Halle Airport in Germany. After spending the entirety of July 6th at Leipzig, the aircraft departed for Accra (Ghana) on July 7th.

This intercontinental flight took seven hours and nine minutes- nowhere near as long as the recent 11-hour flights it has been making between Anchorage and Tianjin.

The aircraft spent the night in Accra before departing at 07:00 local time on July 8th for the five-hour journey to Windhoek. It finally arrived in Namibia at 14:04 local time.

Beng the largest aircraft in the world, the An-225 is typically tasked for very special missions, which are typically quite newsworthy. The behemoth’s mission prior to the Germany-Ghana-Namibia operation took it from a warzone in the Middle East to an Air Force base in the United Kingdom.

Indeed, on June 23rd, the aircraft collected three Puma helicopters from Kabul (Afghanistan). These military helicopters had been used for the UK’s mission in Afghanistan and were headed home due to the British withdrawal of forces. After a short stop in Karachi (Pakistan), the An-225, loaded with helicopters, then made the long-distance, 10-hour journey to RAF Brize Norton in West Oxfordshire, England.

While this would be an interesting story on its own, the aircraft’s departure from RAF Brize Norton drew further attention. As Simple Flying had reported on June 25th, the sheer force of the aircraft’s departure from the airbase’s 3,050-meter long runway caused part of its perimeter fence to collapse in front of the planespotters. Thankfully, there were no reported injuries.

Namibia off to winning start in Congo 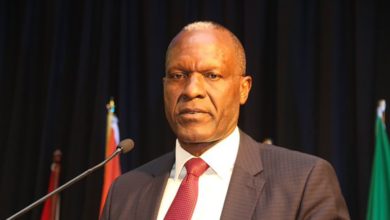 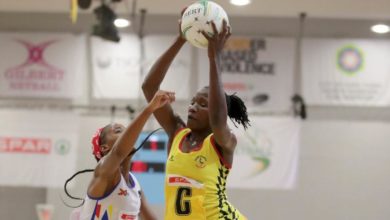 Uganda take the sparkle off Namibia at Spar Challenge – SuperSport