France will reopen its embassy in the Libyan capital Tripoli next Monday to show its support for the North African country’s new unity government, President Emmanuel Macron said on Tuesday after meeting the head of the interim presidency council.

“We will do everything that is in our power to defend this sovereignty and stability agenda,” Macron said alongside Mohammed al-Menfi, the head of the Libyan presidency council in Paris.

“Monday our embassy in Tripoli will reopen and our ambassador will be back on your territory,” he said.

Paris closed its embassy after evacuating some 50 French and British nationals as fighting broke out in Tripoli in July 2014. It based its ambassador in neighbouring Tunis, the capital of Tunisia.

Menfi was making his first overseas visit since taking his post, which was created following a UN-brokered process.

Prime Minister Dbeibah and an interim three-member presidency council were selected at UN-sponsored talks in February.

The new transitional executive emerged from the UN peace process that was launched in November in Tunis, then voted on in Geneva.

It was ratified by Libya’s parliament on 10 March.

Oil-rich Libya has been torn by war since a Nato-backed uprising led to the toppling and killing of long-time ruler Muammar Gaddafi in 2011.

Former French President Nicolas Sarkozy was the chief advocate of the Nato-led military campaign that resulted in Gaddafi’s overthrow.

“I want here to show you all my support and that of France for the new Libyan unified authorities that emerged from the transition process,” said Macron.

“We have a debt toward Libya and the Libyans for a decade of disorder,” said Macron, adding that regional stability would be impossible without peace in Libya.

Macron has been bitterly critical of Turkey’s military intervention in Libya, while rejecting claims that Paris had secretly favoured Libya’s eastern renegade military commander Khalifa Haftar in the conflict.

The internationally recognised Government of National Accord (GNA), which governed western Libya, was backed by Turkey in its battle against Haftar’s forces.

Macron insisted that a priority was the withdrawal of Turkish troops and pro-Ankara Syrian militias, as well as Russian mercenaries who are reportedly on the ground.

An estimated 20 000 mercenaries and foreign fighters are still based in the country, whose presence Dbeibah has called “a stab in our back”.

The UN Security Council last week called on all foreign forces to leave “without further delay”. 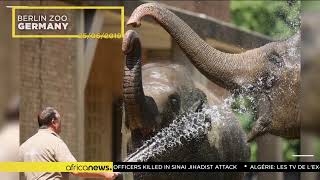 WHO to help five nations yet to start jabs