McDonald’s provided many Russians with their first taste of capitalism three decades ago. Now, the global fast-food giant is exiting the country. Starbucks is also on its way out.

All told, about 1,000 companies have decided to depart Russia so far, according to a running tally by Yale management professor Jeffrey Sonnenfeld.

We are scholars of human rights, political economy and international relations. In our view, this concerted corporate action demonstrates how businesses can leverage their bargaining power in foreign countries – just as countries, including the United States, and nongovernmental organisations like Amnesty International and Human Rights Watch try to do.

On top of pressing Russia to exit Ukraine and cease its targeting of civilians there, foreign companies are urging Vladimir Putin’s government to stop cracking down on Russian citizens who are protesting against the war.

Through a combination of withholding funds, selling assets and refusing to do business with Russian clients and companies, global corporations and investors are making Putin’s Ukraine invasion and domestic repression more costly. Even after the conflict ends, there could be larger shifts in investments, making it harder for Russia to recover.

This is especially true given Russia’s reliance on oil and gas exports. The invasion of Ukraine is spurring importers of Russian fossil fuels to find alternatives.

Overall, recent estimates point to job losses in the hundreds of thousands for Russians because of this upheaval.

One clear precedent arose when anti-apartheid movements sprung up globally to protest the racist system in South Africa. Spearheaded by people in the U.K., these movements brought about widespread boycotts of South African goods in the 1970s and 1980s.

Notable results included the banning of white South Africans from participating in international cricket and rugby events and forcing Barclays Bank out of South Africa. We see echoes of that campaign in the banning of a prominent Russian gymnast for wearing a Z, which symbolises support for Russia’s war on Ukraine.

Many governments imposed sanctions during the 1970s and 1980s, led by European countries. U.S. involvement, through a law passed in 1986 over President Ronald Reagan’s objections, added to that economic pressure.

Many of the blows to South Africa’s economy, however, came from divestment campaigns largely led by anti-apartheid groups on college and university campuses.

These groups sought to pressure higher education institutions to sell off stocks and other assets in their endowments tied to companies doing business with South Africa. By 1990, more than 180 American colleges and universities had divested at least some of those assets. These efforts then spread to local and state governments and the private sector. More than 200 businesses cut their ties to South Africa.

What tech companies are doing

International efforts to place pressure on abusive regimes to stop violence have evolved since the anti-apartheid era, reflecting the growing role of technology in business and society.

Tech and social media companies have also sought, in both Ukraine and Russia, to protect civil and political rights.

Snapchat, for example, turned off the heatmap capabilities of its users located within Ukraine to prevent the Russian military from being able to locate groups of Ukrainian civilians.

In Russia, however, at least some of these efforts could be backfiring.

The Russian government opted to block civilian access within Russia to both Facebook and Twitter, after those platforms blocked Russian state media on their websites. These are key platforms that dissidents use to document and share rights abuses by Russian officials swiftly and efficiently to global audiences. Further, Russian opponents of Vladimir Putin were increasingly using social media to coordinate their protests and dissent before the war on Ukraine began.

Cutting off these services greatly diminishes the ability of Russian citizens to plan protests and share footage of these events.

Global pressure campaigns are generally better at preventing the onset of violence than ending a deadly conflict. However, even when that pressure begins in wartime, it can limit the severity of the most extreme types of violence, like genocide, researchers have found.

This approach appears to work best when outside pressure is coupled with demands from domestic groups, especially secular, cultural and religious organizations that aren’t engaged in politics but generally aim to benefit society.

While these organisations are generally weak in Russia, the country does have an organised – albeit repressed – political opposition. In February and March 2022, over 14 000 people were detained for protesting the war, according to OVD-Info, an independent protest monitoring group.

The largest mass arrest in post-Soviet Russian history occurred on March 6, 2022, when authorities detained 5,000 people across almost 70 cities who were peacefully protesting the invasion of Ukraine.

And new cracks in Putin’s support are showing up.

Russian business leaders, like the self-made tycoon Oleg Tinkov – who founded one of Russia’s biggest banks – are speaking out, as are government employees and members of the military community.

These acts of defiance suggest that there’s a growing campaign within Russia to stop the violence in Ukraine at a time when global corporate pressure is surely stinging Putin.

But, to be sure, he did take several steps to insulate Russia’s economy before attacking Ukraine, including stockpiling foreign reserves, reducing imports from Western countries and increasing trade with countries like China. That makes it too soon to know whether the growing corporate exodus will make a big difference in terms of ending Russian violence.

This article is republished from The Conversation under a Creative Commons license. Read the original article. 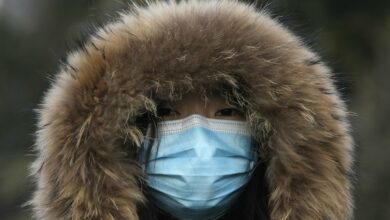 Live updates: CDC: Omicron accounts for 95% of new US cases