When was the last time you sat back and thought about how far car interiors have progressed? What started out as a simple seating area from human occupants has evolved into a spacious, comfortable, and safe environment we take for granted in modern cars. To celebrate the massive progress in car design, Ford Europe took a deep dive into their car interiors starting from the Model T and ending with the futuristic Mustang Mach-E.

When cars first hit the roads around the world they were simple machines that were very basic by today’s standards. Cars utilized household windows if they had any form of glass at all and were operated by a complex system of levers. One critical piece of interior trim that has remained constant is the steering wheel which has never been beaten by any sort of modern solution.

As time went on car interiors began to mimic the most exciting forms of transportation starting with bomber cockpit-inspired designs which eventually gave way to gauge clusters influenced by the space race. If it was shown regularly on TV customers wanted their cars to follow suit.

With the birth of video games and increased use of digital platforms, cars started to slowly integrate screens and add a host of buttons. In the early 2000s cars reached peak buttons and many argue the pinnacle of user-friendly car interiors.

Current car interior trends are taking a less is more approach and do whatever they can to integrate controls on to touch screens. Touch screens are a perfect solution for car companies who are looking to cut costs and reduce the number of parts needed to build a car. Now a dozen buttons are replaced by one simple unit that the marketing team can spin as a modern feature.

In today’s modern cars we are seeing the change of supply and demand for buttons based on the number of buttons customers want versus the amount automakers are willing to supply in modern car interiors. As this design refinement unfolds we are on the cusp of creating the best car interiors ever.

Peugeot to be revitalised as high-end brand 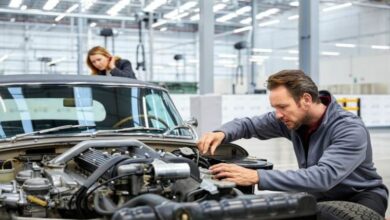