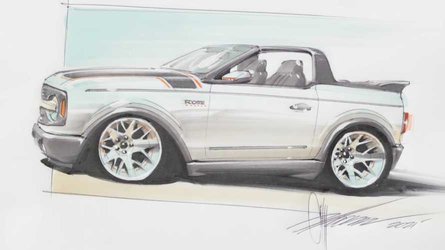 Chip Foose doesn’t like designing modified vehicles that follow the same trend that everyone else is doing. When he applies this ethos to the 2021 Ford Bronco the result is a hot-rod-inspired SUV with a dropped ride height and a swept-back windshield.

Foose is a fan of the new Bronco’s overall appearance, but if someone wants to overhaul one, he has some ideas. Foose retains the wheelbase and shape of the fenders but alters practically everything else.

The drawing of the custom Bronco gives it a much more prominent front bumper that makes the SUV appear to be sitting even closer to the ground. The tie-downs on the hood are gone. To create a sleeker appearance at the front, he drastically angles the windshield.

New side sills taper upward to accentuate the vehicle’s stance. Rather than the off-road setup of using big tires, Foose installs large, Mustang-inspired wheels with skinny rubber wrapping around them. He also imagines the roll hoop and rear spoiler as a single piece that would attach to the sides of the body.

As a final flourish, Foose covers the hood and front fenders with a black stripe that has orange accents. He carries the darker shade to the windshield, roll bar, and along the windowline.

In the video, Foose imagines some possible powetrains for this machine. He mentions several times using the running gear from the modern Ford Mustang Mach 1 that packs a 5.0-liter V8 making 480 horsepower (358 kilowatts). Alternatively, he suggests giving the hot rod SUV 1,000 hp (746 kW), which seems like a cartoonishly over-the-top creation.

If you actually want a Bronco hot rod, you’re going to need to hire someone like Foose to build one because there’s no chance Ford sells anything like this. Instead, the Blue Oval is going the other direction by building the hardcore Warthog.

Taking to the skies | SAnews 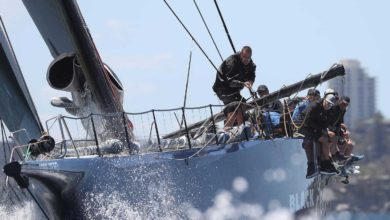