Since the onset of the pandemic, progressive thought has held that you should always seek to protect lives instead of protecting the economy. Yet choices are not always so clear, particularly in poor countries. In fact, for many years evidence in the Global South has shown that saving lives involves protecting the economy.

Few social scientists have been called on to contribute to the major policy decisions regarding this pandemic. Yet they have known for decades that GDP is closely related to life expectancy in poor countries. This is demonstrated by the so-called Preston Curve. The Preston Curve shows that life expectancy rises significantly in countries with a low GDP per capita, when that GDP is slightly raised. The correlate of course is that when GDP falls in low-income countries, life expectancy falls dramatically as well.

Since 2000, this thesis was confirmed in Africa. In the last 20 years, the continent has seen a dramatic rise in GDP. The Financial Times named Ethiopia as the country with the biggest rise in GDP in the 2010s, with an increase of 146.7 per cent between 2009 and 2014. Across the continent, GDPs rose. All of this was linked to a steep rise in life expectancy, with an overall rise of 9.4 years across the continent between 2000 and 2019. Until last year, this trend was expected to continue: the continent’s overall GDP rose by between 3 to 4 per cent in every year between 2017 and 2019, and in a report of February 11th 2020 the World Economic Forum projected it to keep growing for several years into the future.

However, all these gains in economic and public health are now at risk. The response to the pandemic saw the GDP gains in Africa reverse dramatically in 2020. A recent series of reports by the African Development Bank showed a collapse in African GDPs, with countries including Botswana, Cabo Verde, the Republic of Congo, Namibia, South Africa and South Sudan all seeing GDP losses of more than 8 per cent, and widespread losses of four to five per cent. Given the informal nature of the economy, these are likely underestimates of the true impact.

How do falls in GDP translate into poor health outcomes? The World Health Organisation’s research shows that poverty is closely linked to premature mortality. An April 2020 WHO report highlighted that malnutrition was responsible for 45 per cent of global mortality for children aged under five. Increasing poverty means an inability to fund good nutrition among poorer people, affecting their immunity, and making them more susceptibile to disease. It also tends to drive increases in rural-urban and global migration.

The pandemic response has made this worse. One of the under-reported human crises of 2020 was the dramatic increase in West African migrants attempting to reach the Canary Islands by sea. Over 25,000 people, mainly from Senegal and the Gambia, arrived during 2020 on motorised fishing dugouts, where only 2,557 had arrived in the whole of 2019. The impact of the severe economic restrictions caused by lockdowns in Senegal—which provoked riots in June, and contributed to even more severe unrest in March this year—was clearly decisive in this increase in the dangerous journey across the Atlantic to Tenerife.

In India, meanwhile, the recent distressing scenes from Delhi have concentrated minds as to the potential impact of Covid-19 in a poor country. The health of many in India was already weakened by the lockdowns of March and April 2020—whose impacts were compared by some to partition—and the collapse in the informal economy that followed. Covid is clearly an illness which targets poverty, as well as age and overall health, and so policies which increase poverty and therefore exacerbate weak immunity systems seem to have had devastating effects.

This is all vital in considering pandemic policies. The one-size-fits-all approach is not appropriate to a world where there is a huge gulf in health and economic systems. This was recognised by a December 2019 WHO report into pandemic mitigation strategies, which noted the ethical considerations that should be factored into policies as regards migrant workers. Yet this recognition of the importance of different approaches has not been apparent since March 2020. Indeed, in a recent article published in the Lancet, a team of scientists concluded that the best way to protect economic and social livelihoods was virus eradication—“zero Covid.” This research was based only on studying OECD countries not poor countries, but still concluded that since countries that opt to live with the virus “will likely pose a risk to other countries,” there was a need to roll this strategy out globally.

However, as we have seen, in poorer countries saving lives involves protecting the economy—and the best way to do this may differ from the strategies adopted in the west. In Africa, one of the very few exceptions to the economic collapse of the last year has been Tanzania, where GDP rose on some estimates by 5.5 per cent in 2020. Tanzania’s late President John Magufuli was widely excoriated for not pursuing a lockdown policy and for advocating herbal remedies for Covid-19, rather than vaccines. Instead, he allowed informal workers with tiny incomes working on the streets and in small markets to continue to earn their livelihoods. The evidence of decades of research and of the past year suggests that his approach has saved lives, and that the virus suppression policies still championed by some for the whole world has already shortened very many African lives. 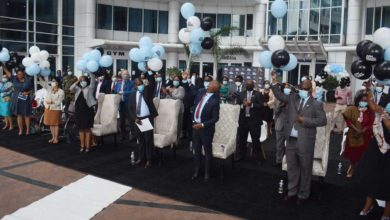