Confronting footage of a cyclist being sent flying through the air by a car on a busy Sydney road has sparked a furious online debate over who is at fault.

A video uploaded to Dash Cam Owners Australia captured the heart-stopping collision, which occurred on Stanmore Rd, Petersham, across from Maundrell Park.

It is not clear exactly when the incident occurred.

In the footage, a cyclist in a white helmet can be see waiting near the park to cross the road.

The cyclist is hit by a black Nissan 370Z, sending him flipping through the air before he crashes down on the pavement.

The cyclist’s helmet, bag and bike are all sent flying in different directions.

The driver immediately stops and people come running out of nearby shops to help the cyclist.

Fortunately, the rider appeared to escape serious injury, immediately jumping up from the ground and speaking with the driver.

The video has gained more than 1700 likes and more than 1000 comments, with social media users getting in a debate over who was at fault.

The majority of commenters seemed to agree the cyclist was at fault for not using a designated crossing to cross the road.

“God I feel sorry for the car driver! So many cyclists on the road who have no clue of the rules! Although I am glad the cyclist wasn’t really badly hurt,” one person wrote.

“What the rider expects crossing double solid line and sneaking behind the vehicles? For the black Nissan, only thing he didn’t follow was driving appropriate to the surrounding traffics,” another said.

“Was a bit fast for such a jam but would hit the (bike) even with slower speed. Rider absolutely at fault and was the luckiest person on that day.”

One added: “That 370Z owner would be fuming. This is a great example of why you may as well not even bother with a helmet if you don’t strap it up.”

However, there were some social media users who took the cyclist’s side, calling out the car driver for going too fast for the conditions.

“The kid should not have gone through but that driver was driving way too fast next to stopped traffic. This stuff happens all the time in this circumstance,” one person wrote.

Another commenter hit back at those who were criticising the rider for not wearing his helmet correctly.

“Just because his helmet came off doesn’t mean he didn’t have it clipped on. I came off my bike once had my helmet on nice and tight after my head hit the ground the helmet came off and was still clipped,” they wrote.

Hotels.com Is Giving Travelers $5,000 to Go on a Vacation Based on Their Literal Dreams 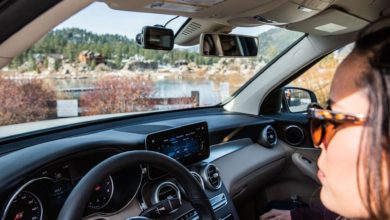 Motorists could save 30% on car insurance with a dashcam 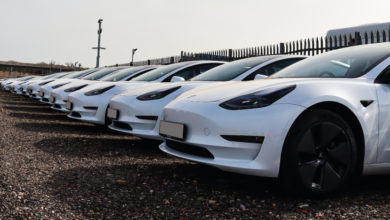