Dozens of people were said to have been killed in a raid by Islamist militants in Mozambique, as an upsurge of violence threatens billions of dollars worth of energy projects in one of Africa’s poorest nations.

The violence began March 24 when armed attackers described by the government as terrorists assaulted the northern coastal town of Palma, close to a $20 billion liquefied natural gas project being developed by France’s Total.

The Paris-based company at the weekend suspended plans to resume construction. Fighting in the town was continuing on Monday morning, and Islamic State said later in the day that its fighters were behind the attack.

It’s the latest in a series of incidents that are undermining the southern African country’s hopes of developing some of the continent’s biggest private investment projects. As much as $120 billion of investments by Total, Exxon Mobil Corp. and other companies may be approved by 2026, according to Standard Bank Group Ltd.

Yields on Mozambique’s Eurobonds spiked by 25 basis points to 10.45% on Monday, the highest level since since June. It’s also the yield that’s deepest in distressed territory than any nation on the continent, besides Zambia, which is in default.

Mozambique has been battling an Islamic State-linked insurgency since October 2017. Over the past year, attacks have grown increasingly sophisticated, while also drawing closer to the coastal site where Total leads a consortium building a project to extract, liquefy and export gas from offshore wells.

The latest attack came soon after Total announced a resumption of work that had been halted at the start of the year because of the deteriorating security situation. Palma is about 8 kilometers (5 miles) from Total’s site and serves as a base for several companies involved in the LNG projects. Many workers stay in the hotels there.

Total said at the weekend it’s reducing the number of workers at the site to a minimum and suspended the plans to resume work.

Defense Ministry spokesman Omar Saranga said on Sunday the attackers’ aim is to harm the energy projects. The government has resisted outside help to fight the insurgency, relying instead on a private military company that uses helicopters mounted with guns.

While hundreds of people, including some foreign workers, were evacuated by boats to the provincial capital of Pemba, almost 250 kilometers to the south of Palma, many people remain unaccounted for.

The armed group known as al-Shabaab, which is unaffiliated with the Somali group of the same name, had attacked villages increasingly close to Total’s site in December, prompting the company to halt work and evacuate staff.

The energy company, which bought a 26.5% stake in the development for $3.9 billion in 2019, hasn’t said when operations might resume.

“Total trusts the government of Mozambique, whose public security forces are currently working to take back the control of the area,” the company said in a statement Saturday.

Islamic State released a photo on its social media platforms of fighters allegedly in Palma wearing red headbands and camouflage military uniforms. That’s a tactic the group’s affiliates have used in West Africa, probably to distinguish one another during battle, according to Tristan Gueret, an analyst at Risk Advisory Group.

“This tactical similarity suggests that Islamic State is potentially providing local militants with advice,” he said in reply to questions. “There have been clear indications that the level of coordination and preparedness of militant groups in Cabo Delgado has increased since Islamic State started claiming attacks in the province in June 2019.” 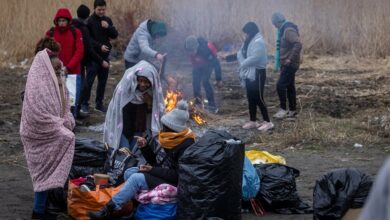