Burberry has predicted it will take several years for long-haul travel to recover from the coronavirus pandemic, with the absence of wealthy tourists a severe blow to its UK shops.

In normal times a shopping trip to Burberry would be on the itinerary of international visitors but the hiatus caused by Covid-19 meant the luxury retailer’s sales in its home market were more than 50% down on 2019 levels in the year to 27 March 2021.

Julie Brown, Burberry’s chief operating and financial officer, said despite the easing of lockdown restrictions it was still a “very, very, muted” travel picture. “The UK was previously highly dependent on the travelling consumer,” she said. “It was about two-thirds of our business prior to Covid, so a very material impact on the UK.

“We are starting to see some local travel in Asia and, prior to this recent outbreak, travel resuming in Europe but I think long-haul travel will take some time to return. We certainly see that being a couple of years away.”

But with sales rebounding in other markets, in particular within the Asia-Pacific region, where they finished up 17%, overall sales fell 11% to £2.3bn. Adjusted underlying profits declined 9% at £396m, with the company reinstating its dividend at the same level as in 2019.

The shares were the biggest faller in the FTSE 100, down 8% at £19.38. Richard Hunter, head of markets at interactive investor, said Burberry had put a “tough year behind it”. The return of the dividend showed “management confidence”, he said, with the share price reaction likely reflecting profit-taking by investors after a gain of 52% over the past year.

The update came as chief executive, Marco Gobbetti, declared the first stage of his revamp of the British label, best known for its trenchcoats and signature check, complete. In 2017, he revealed a plan to take the luxury brand even more upmarket, putting it into the same orbit as Gucci and Dior, which command higher prices and profit margins.

Over the past three years Gobbetti said the company had “achieved what it set out to do”. The collections of its creative head, Riccardo Tisci, the former Givenchy designer who replaced Burberry’s longstanding creative supremo, Christopher Bailey in 2018, had attracted new and younger customers, he said.

He highlighted the success of Tisci’s Monogram collection, where the products are covered in a pattern of interlocking Ts and Bs, after the initials of the company’s founder, Thomas Burberry. Items include £620 trainers and a £590 canvas bumbag.

For luxury brands the big prize is the lucrative leather goods market where deep-pocketed consumers are willing to spend several thousand pounds on a new handbag. Burberry had successfully moved its bag range upmarket, Gobbetti said. Its current bestsellers are the Lola and Pocket bags, which start at around £1,000, but can cost double that depending on the finish.

A “step change in the quality of materials, hardware and finishing” justified higher prices, he said, with the company signalling high hopes for its new crescent-shaped Olympia bag, named after the Olympia exhibition centre in London, where it was unveiled on the runway. The mini version of the bag starts at around £1,000.

“We have repositioned Burberry with external consumer research confirming that our brand is now firmly considered as luxury,” said Gobbetti. “We have attracted a new customer, gaining traction with young, influential fashion-forward consumers, while at the same time driving growth in our existing customer base.”

Women on the move in the motoring world 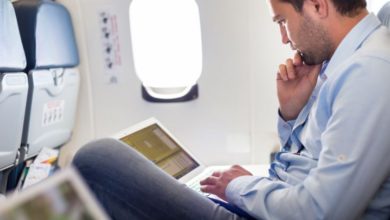 Business travellers are increasingly willing to give up flying | Life

Holidays are a game of Russian roulette — are they worth the risk? | Travel

The Best Navigation Apps to Plan a Road Trip This Summer