The latest Covid outbreak in Australia has once again resulted in state border closures, restrictions and cancelled plans.

State and territory health authorities are monitoring the cases and the situation is changing daily. Here is a state-by-state breakdown of where you can and can’t travel and what you need to do before you leave home.

Sydneysiders are unable to travel to regional NSW. That is expected to remain the case until at least 30 July.

People are barred from leaving the city, except for essential purposes, subject to the lockdown rules.

Interstate arrivals to NSW from the Northern Territory, Queensland and Victoria, including people who have been in those states for any time during the previous 14 days, need to complete an entry declaration.

Travellers from those jurisdictions will need to complete a travel declaration within the 24 hours immediately before entering NSW, or on entry. Anyone who has been to a venue of high concern (listed here) must follow testing and self isolation requirements.

All travellers from anywhere in Australia must apply for a permit to enter Victoria.

However, every area that is currently in lockdown has been declared a “red zone”, meaning their residents are banned from entering Victoria.

That means all of New South Wales and the Australian Capital Territory.

From 11.59pm 20 July, the only people in NSW who will be able to apply for a permit to enter Victoria will be authorised workers and people granted a compassionate exemption.

Other areas which had recently been in lockdown are now classed as an orange zone. So that’s greater Darwin and Alice Springs in the NT, the Perth and Peel region of WA, and Brisbane, Moreton Bay and Sunshine Coast LGAs. The rest of Queensland is a green zone.

Victorian residents returning from a red zone can enter the state but must quarantine for 14 days. Anyone travelling from an orange zone must get tested within 72 hours of arrival and remain in self-quarantine until they get a negative result.

The Queensland government has extended border restrictions to all of greater Sydney, including the Central Coast, Blue Mountains, Wollongong and Shellharbour.

Following an outbreak in Victoria, Queensland will declare the state a hotspot from 1am Saturday, 17 July.

The state is also declaring South Australia a hotspot from 1am Thursday 22 July.

People who live in or have visited these areas are barred from entering the state, unless they are granted a special exemption.

If you are a Queensland resident returning from these areas, you will need to quarantine at a hotel for 14 days at your own expense.

If you are not a Queensland resident, and you have been to these areas, you need to apply for an exemption, and if that is granted, you will need to quarantine in a hotel for 14 days at your own expense.

Everyone needs to complete a travel declaration form up to three days prior to arrival to enter the state.

As of 2 July, no areas of the NT or of WA were declared Covid-19 hotspots by the Queensland government so travel is permitted, if a travel declaration form is signed.

Restrictions are in place for people coming from the NT and the ACT, which means anyone entering from those states or territories must go through 14 days’ quarantine and be tested.

Restrictions have also been reinstated for South Australia, with anyone arriving from that state required to get tested and self-quarantine for 14 days.

Tasmania is the only state that does not have quarantine restrictions. Arrivals will still have to complete the mandatory G2G pass registration and declaration, as well as completing a health screening on arrival.

The ACT has tightened its border restrictions in response to the Covid situation in NSW and Victoria.

Non-ACT residents entering from Victoria or from greater Sydney, Blue Mountains, Central Coast, Wollongong and Shellharbour, or from the Orange, Blayney and Cabonne local government areas of NSW will not be allowed to enter unless they have an exemption, which will only be granted in exceptional circumstances.

Returning ACT residents will need to complete an online exemption form prior to their travel, and will still need to quarantine at home for 14 days.

In addition, anyone arriving from any state or territory must check the close contact and casual contact exposure locations (listed here). Anyone who has visited a close contact exposure location cannot enter the ACT without an exemption. Anyone who has visited a casual contact location must complete a self-declaration form, and isolate until a negative test result.

Travellers from all other states and jurisdictions can travel freely to the ACT.

South Australia has closed its border with Victoria, NSW, the ACT and some parts of Queensland.

All arrivals from NSW, including returning South Australian residents, are not allowed to enter SA – unless they are an essential traveller or have an exemption.

For NSW, a 100km buffer zone is in place to allow people living near the border, including in Broken Hill, to travel into SA.

All non-SA residents who have been in Victoria in the previous 14 days are barred from entering SA.

Returning residents from Victoria and greater Brisbane are allowed to enter, but must self-quarantine for 14 days. If they haven’t been in greater Melbourne for the past 14 days, they must get tested on day 1, 5 and 13 and quarantine until receiving a negative result.

Travellers from WA, the NT and from Townsville in Queensland are allowed, but must have Covid tests on day 1, 5 and 13, and must self-quarantine until receiving their first negative result.

There are no restrictions on people from Tasmania, or other parts of Queensland.

All interstate arrivals to the Northern Territory must fill in a border entry form.

People in Greater Sydney, Wollongong, and the Central Coast of NSW, as well as the City of Brisbane and Moreton Bay region of Queensland, will not be able to enter without 14 days’ quarantine.

The NT’s chief health officer has also declared several hotspots in South Australia, effective from 21 July. Anyone who travels to the NT from these areas will have to quarantine for 14 days.

Anyone currently in the NT who is deemed a close contact by the NSW, Queensland or WA governments must undertake 14 days of quarantine in their home or at a suitable place. Any casual contacts must isolate, get a Covid-19 test and remain in self-quarantine until a negative test is returned.

Travellers from greater Melbourne no longer need to go into quarantine.

The state remains closed to people from the greater Sydney area, the Central Coast and Wollongong in NSW.

No one from these areas can enter Tasmania unless they have special permission from the deputy state controller.

Anyone who has been in Victoria since 8 July is not allowed to enter Tasmania without an exemption.

Anyone who has been in South Australia is also not permitted to travel to Tasmania, unless approved as an essential traveller, including returning residents.

Tasmania has reopened to travellers from Western Australia’s Perth and Peel regions, the Northern Territory, and Queensland.

People who have been to certain specific exposure sites will not be allowed to enter the state –and this includes shops, venues and airport terminals in Victoria, NT, SA WA and Queensland.

As with other states and territories, all arrivals into Tasmania must provide their contact and travel details before entering the state.

A ban on people travelling from metropolitan Melbourne has been lifted, with the city downgraded to low risk.

The NZ government has announced it will stop quarantine-free travel with Australia for two months.

New Zealand has already paused the travel bubble with NSW and Victoria, but the new shut down will apply to all of Australia for eight weeks from midnight Friday, 23 July. 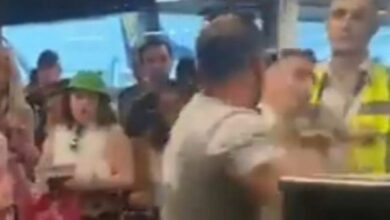 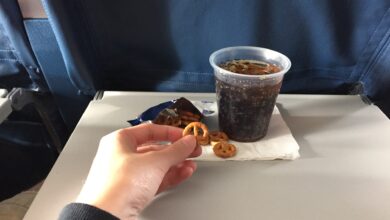 ‘Physically and emotionally exhausted:’ This is how flight attendants are really feeling right now