The South African U-20 national team got their first victory of the 2020 COSAFA Championship after hammering Lesotho 7-0 courtesy of a hat-trick by Sinenjongo Mkiva in Group A on Sunday afternoon.

After losing in the final in the previous edition, Amajita began this year’s tournament with a 2-2 draw against Zimbabwe on Thursday afternoon.

South Africa got off to a great start after going ahead in the fifth minute thanks to an own goal by Thapelo Mohale before captain Rowan Human doubled the lead for Amajita in the 16th minute with a screamer.

Helman Mkhalele’s charges had their tails up after that as Mkiva gave his side a commanding 3-0 lead just before they headed to the break.

South Africa started the second stanza with their guns blazing after Oswin Appolis, who netted against Zimbabwe, made it 4-0 barely a minute after the interval.

Mkiva got the fifth goal for Amajita on the hour-mark and grabbed his brace after profiting from a mistake at the back by goalkeeper Mosoeu Seahlolo.

Mkhalele’s boys were running riot as Mkiva made it 6-0 in the last five minutes to complete his hat-trick while Tshepo Myeni got the seventh goal in stoppage time.

Amajita maintained their hopes of reaching the latter stages of the tournament with their first win and went up to second in Group A, two points behind leaders Mozambique. 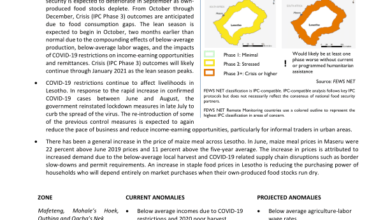 Electricity in Lesotho to be supplied by Mozambican utility |