The prevalence of cognitive impairment in CKD patients ranges from 17% to 87% depending on severity.12–16 Its prevalence among CKD patients is 20% in the United Kingdom,17 75.5% in China,18 and 53.8% in India.19 A comparative cross-sectional study in Nigeria showed that the prevalence of cognitive impairment CKD patients is 35.3% whereas for the control group it is 6%.20 Those chronic kidney disease patients with cognitive impairment have an increased risk of death, poor quality of life, difficulty in adhering to medications, and worse quality of emotional well-being.21–29 It is a major cause of morbidity and a determinant of the quality of life in the elderly chronic kidney disease patients.30,31 Among hemodialysis patients it is also associated with an approximately two-fold increased risk of both mortality and dialysis withdrawal.32

Moreover, cognitive impairment also leads to increase costs for governments, communities, families, and loss of productivity.11,33 In Ethiopia, there was no study done previously on its prevalence and associated factors among CKD patients. Therefore, this study was conducted to determine the prevalence and predictors of cognitive impairment among chronic kidney disease patients.

An institution-based comparative cross-sectional study was conducted at the University of Gondar Comprehensive Specialized and Felege Hiwot Referral Hospitals from February 2020 to April 30, 2020.

Zα= standard normal variate for the level of significance

In this study r=1 since equal sample size for both groups was taken.

Chronic kidney disease is defined as abnormalities of kidney structure or function, present for >3 months, with implications for health.1

Anemia was defined as a hemoglobin concentration below 13 g/dl in men and below 12 g/dl in women.39

Khat chewer: individuals who had ever used khat at least once in their lifetime.

Cigarette smoker: individuals who had ever used cigarette at least once in their lifetime.

Alcohol drinker: the proportion of individuals who had ever used alcohol drinks such as tela, tej, katicala/areke, beer, wine, or other drinks that can cause intoxication at least once in their lifetime.40

Comorbidity: the presence of one or more of a documented case of the following diseases: hypertension, cardiovascular diseases, and diabetes mellitus.

Proteinuria: the presence of protein in the urine, ≥+1 in the dipstick.43

The collected data were checked for their completeness and coded then entered into Epi data version 3.0 then exported to STATA 14 for analysis. Descriptive statistics; frequency, percentage, and bar graph were used for categorical variables while median, interquartile range, mean, and standard deviation were used for continuous variables. Independent t-test was used to compare the mean difference for continuous variables of study groups whereas X2-test was used to show an association of the categorical variables among study groups. Both bi-variable and multi-variable logistic regression analyses were done. Variables associated with cognitive impairment at p-value of <0.25 level in the bi-variable logistic regression were included in the multi-variable regression model. In the multi-variable logistic regression, variables having a p-value of ≤0.05 with a 95% confidence interval were declared as significantly associated with cognitive impairment. Finally, model fitness was checked by Hosmer and Lemeshow test. Using this test the final multiple logistic regression model p-value was 0.568, since it was greater than 0.05 the model was fitted. Cronbach’s alpha test for the SMMSE tool was done with a reliability coefficient value of 0.78 which shows good reliability of the tool.

Comparison of Cognitive Impairment Among CKD Patients and Controls

This research tried to offer insight on the magnitude of cognitive impairment and its significant predictors among CKD patients in comparison with healthy individuals.

In this study, the prevalence of cognitive impairment was 49.1% [95% CI (40% −58.3%)] among CKD patients. It was similar to the study conducted in Nigeria (51.9%) and India (53.8%).19,34 The possible reason for this cognitive impairment among CKD patients might be due to retention of different neurotoxins. Besides damaging neurons, different waste product accumulation in the blood may result in signaling disturbance in the brain regions, particularly in those involved in cognitive activities.45–47 However, a cross-sectional study conducted in the United Kingdom reported a lower prevalence (20%) of cognitive impairment than the findings of this research.17 This difference might be because of a large proportion of participants with a higher educational level were included in the United Kingdom study, which might be lower the prevalence of cognitive impairment.19 Compare to study done in China (75.2%) this research finding was low due to the old age of study participants in China.18 Many studies showed that being an old age was a risk factor for cognitive impairment due to the neurotransmitter derangement during aging.25,48

The prevalence of cognitive impairment among healthy controls in this study was 28.4% [95% CI (20.9–37.5%)] which was similar to the study done in Central Africa republic (25%), and Cameroon (33.3%).35,49 But findings from Nigeria (6.3%), Botswana (9%), and Congo (18.8%)20,49 reported a lower prevalence of cognitive impairment. The possible reason for this difference might be due to variations in the tool used to assess cognitive impairment and sociodemographic differences of study participants. Community screening interview for dementia tool was used in Nigeria, Congo, and Botswana.

This study showed a higher prevalence of cognitive impairment among CKD patients than healthy controls. This finding was similar to the study done in Nigeria.50 It might be because of the effect of waste product retention in blood like urea and electrolyte due to a decrement of GFR or abnormality of glomerular capillary. Chronic kidney disease is also associated with many comorbidities that may lead to cognitive impairment like DM, hypertension, and anemia.

Decrease glomerular filtration rate was a significant predictor of cognitive impairment among CKD patients which was similar to other studies.20,51,52 Patients who had eGFR <60 mL/min/m2 were 3.9 times more likely to develop cognitive impairment than those patients with eGFR ≥60 mL/min/m2. This could be due to the effect of neuronal toxic waste product accumulation in blood as glomerular filtration decreases. Specifically, increased levels of uremic toxins, neuropeptide Y, increased parathyroid hormone, reduced levels of kidney neurotrophin, homocysteine, and vascular damage in the central nervous system may induce cognitive impairment. Noradrenergic, serotonergic, histaminergic neurons, and acetylcholinergic neurons in the encephalic trunk and hypothalamus are responsible for initiating the activity of the cortex and several subcortical regions. Those regions are responsible for sleep-wake cycles, memory, and attention. But those neurons might be sensitive to the concentration of uremic neurotoxins, result alterations in sleep patterns, mood, and attention in CKD which might lead to the development of cognitive impairment in CKD patients.9,45–47 Anemia which is common in CKD patients was associated with tissue hypoxia and decreased oxygen delivery to the brain which might lead to cognitive impairment. Erythropoietin is a neuroprotective agent so, its decrement in CKD patents might lead to the exposure of neurons to a neurotoxic substance.20,53 In addition to this electrolyte, and acid-base imbalance in CKD patients might be also the cause of cognitive impairment.45

Proteinuria was significantly associated with a decline in cognition. The odds of cognitive impairment was six times higher among CKD patients with proteinuria than patients with proteinuria negative. This result is in line with a systematic review and meta-analysis done in Greece.54 Proteinuria is a marker of generalized endothelial dysfunction and microvascular disease. It is associated with both brain atrophy and white matter demyelination with axonal loss55 which might be a possible reason for the risk of cognitive impairment in proteinuria.

Those patients who attained grade 8 and lower were more likely to develop cognitive impairment than those patients attaining college and above, which is in line with the study done in Jamaica.56 The reason might be due to formal education provides the necessary knowledge, understanding, skills, and competencies which constantly improve cognitive function.57 Education may create cognitive reserves by increasing synapse number or vascularization.58

Increasing age was significantly associated with cognitive impairment. This finding is in agreement with other studies.20,35,49,51,52,56,58 This might be due to decline in gray matter volume, neurotransmitter, and neocortical synapses during aging which result in cognitive impairment.59–61

Limitation of the Study

The SMMSE tool is used only for screening purposes, so it is impossible to reach a diagnosis using this tool.

The data will be available upon request from the corresponding author.

Ethics Approval and Consent to Participate

We would like to thank the University of Gondar for its sponsorship to conduct the study. In addition to this study participants also acknowledged for their willingness and cooperation.

All authors made substantial contributions during conception and design, acquisition of data, or analysis and interpretation of data; took part in drafting the article or revising it critically for important intellectual content; agreed to submit to the current journal; gave final approval of the version to be published; and agree to be accountable for all aspects of the work.

There is no funding to report.

None of the authors have any conflicts of interest for this work to declare.

33. World Health Organization. Meeting on the Implementation of the Global Action Plan on the Public Health Response to Dementia 2017–2025. Geneva; 2018.

Can South Africa’s  Covid vaccine roll-out be sped u… 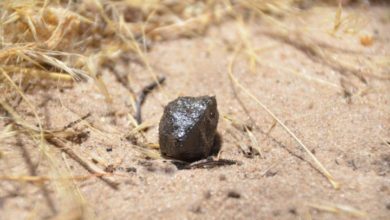 Asteroid that hit Botswana in 2018 likely came from Vesta