Bishop Michael Sandlana was released on R 5 000 bail in the Alexandra Magistrate’s Court on Monday.

International Pentecost Holiness Church leader, Bishop Michael Sandlana, has been released on R5 000 bail after being arrested for fraud in connection with a death certificate issued for his estranged wife, who is still alive.

Sandlana, 60, and his co-accuseds Thabo Mosime, Oupa Mkhonza, and Motome Ramothwala – a lawyer – appeared in the Alexandra Magistrate’s Court on Monday, where they are charged with fraud.

TimesLive reported that Sandlana’s wife Magalane Benedicta Sandlana, 29, opened a fraud case on Friday after she leant that a death certificate had been issued for her on 14 April by the Department of Home Affairs. Magalane discovered this while trying to complete a bank transaction.

After Magalane was declared dead, the bishop was named the executor of her estate.

Legal heavyweight advocate Barry Roux represented the group, and Mosime was also released on R5 000 bail, while Mkhonza and Motome were released on R2 000 bail.

International Pentecostal Holiness Church members gathered outside the Alexandra Magistrates Court where leader Bishop Michael Sandlana was released on R5000 bail. He and 3 others were arrested for fraud after his estranged wife was declared dead while alive (@TeamNews24) pic.twitter.com/Oq65dWBorZ

Meanwhile, outside court, about 100 congregants of the church broke out into song and dance as Sandlana made his way out of court after paying bail.

The matter will be back in court in June. 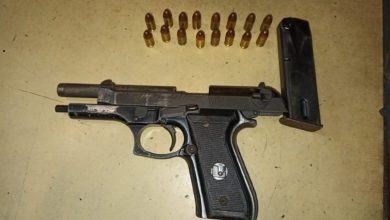